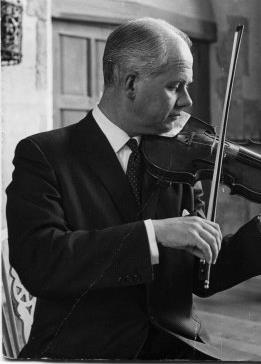 British violinist Colin Sauer has died at the age of 90. For 22 years he was the leader of the Dartington Quartet, which became known for its frequent radio and television broadcasts. In his long career, Sauer also served as leader of the Bournemouth Sinfonietta and as deputy leader of the Academy of St Martin in the Fields.

Born in 1924, Sauer won a scholarship to study violin at the Guildhall School aged ten. Six years later, he entered the Royal Academy of Music (RAM) where he was taught by Rowsby Woof. He made his Wigmore Hall recital debut in 1946 at the age of 22. In its review, The Strad predicted that ‘if he continues as he is progressing at present, he will be one of our foremost exponents of the violin... His technique is remarkable not only for its brilliance and assurance, but for its clean-cut quality and for purity of intonation.’ By this time Sauer was already an accomplished chamber musician, having played for two years with the Aeolian Quartet as second violinist.

In 1953 Sauer took up a post at Dartington College of Arts in Devon, where he taught violin and chamber music. Five years later he co-founded the Dartington Quartet with fellow violinist Peter Carter, violist Keith Lovell and cellist Alexander Kok. The quartet was originally formed in order to illustrate pedagogue Hans Keller’s lectures on ‘functional analysis’, but went on to make a number of recordings, including quartets by Shostakovich and Hugh Wood. Its broadcasts of the Schoenberg quartets were highly praised.

Sauer had a long association with the RAM. He played the 1699 ‘Kustendyke’ Stradivari, an Academy loan, for most of his time with the Dartington Quartet, and in 1964 he was made a Fellow of the Royal Academy of Music.