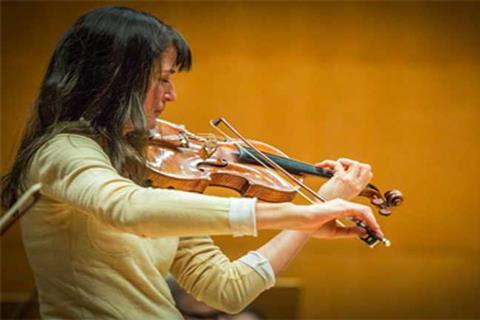 Viktoria Mullova was born in Zhukovsky, near Moscow, in Soviet Russia. She studied at the Central Music School of Moscow and the Moscow Conservatory and forged an international reputation after winning first prize at the 1980 Sibelius Competition in Helsinki and the Gold Medal at the Tchaikovsky Competition in 1982. In 1983 Mullova was the subject of Cold War controversy during her dramatic and high profile defection to the West when she was forced to seek refuge in an American safe-house for several days. She has since become renowned for her performances of J.S. Bach and her individual interpretations of popular and jazz compositions by Miles Davis, Duke Ellington, the Beatles, and others. Mullova's interest in authenticity has also led her into collaborations with period instrument ensembles such as the Orchestra of the Age of Enlightenment and she has appeared with most of the world's greatest orchestras and conductors at the major international festivals. Viktoria either plays on her 'Jules Falk' 1723 Stradivarius or a Guadagnini violin.