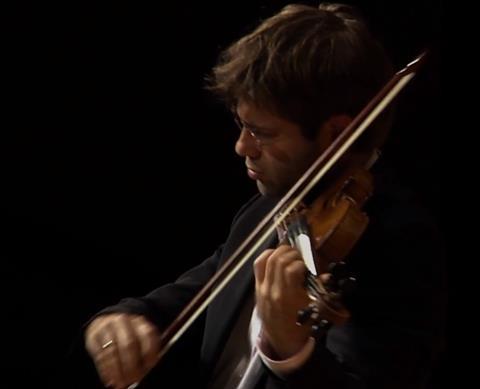 Dr Tomas Cotik, violin soloist, Amernet String Quartet member and professor at the University of Miami, performs the Largo from Bach's Violin Sonata no.3 on his modern violin and a Baroque bow. He describes his decision to use this combination for the recording below:

'I usually play a modern instrument and a Sartory bow, but after much deliberation, I recently chose to record the Gallant and Baroque pieces by Telemann and Bach for my solo violin album with a Baroque bow. Before doing this recording, I had experimented for several years switching back and forth between a Baroque bow and my more modern Sartory bow (ca. 1893/94) when playing Baroque repertoire. Finally, on the recording date, only after listening to the sound samples, I decided which bow to use for this album. I enjoyed the expressive potential of the Baroque bow, the transparent textures, and the effortlessness with which it went 'around the curves', changing strings and direction with ease. The ability to differentiate subtle nuances at the beginning and end of each stroke and the subsequent numerous possibilities of connection between those notes appealed to me as well. The Baroque bow naturally helped me interpret the music and avoid wrong accents in this repertoire. Furthermore, it allowed for a lighter sound, quicker, more flowing tempi, and lively articulations.'