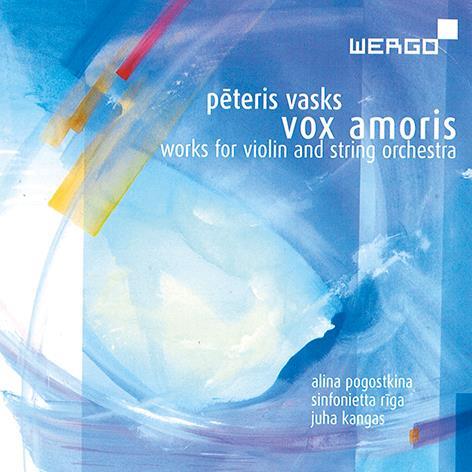 Listening to this disc straight through might not be the best way to appreciate it: the three pieces for violin and string orchestra by Latvian composer P?teris Vasks that it features all occupy broadly the same slow-moving, diatonic, melancholy sound world. But once Vasks’s music gets under your skin, there’s no denying its emotional impact, and young Russian-born violinist Alina Pogostkina’s compelling performances brilliantly capture the pieces’ sometimes elusive and shifting moods.

Her playing is clear and focused throughout, with a strong sense of line and a sure feeling for pacing – all put to good use in conveying the composer’s rather meandering melodies. In the love-themed Vox amoris (2009) (which sometimes strays dangerously close to Barber’s famous Adagio), Pogostkina is appropriately passionate but never overstates things. The longer ‘Distant Light’ (1997) has a broader canvas, moving from folk-like melodies to a terrifying danse macabre, and draws more assertive playing from Pogostkina, who loosens some of her usual firm control in the piece’s increasingly unhinged cadenza, to great effect. The short Lonely Angel (2006), Vasks’s orchestration of the last movement of his Fourth String Quartet, showcases her immaculate bowing in a seamless, seemingly endless melody.

There’s solid support from the Sinfonietta Riga players under Juha Kangas, but recorded sound shines the spotlight so strongly on the soloist that occasionally the orchestral detail is slightly obscured.