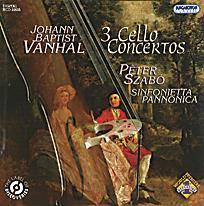 Péter Szabó here disseminates more outcomes from his enterprising explorations of library and museum shelves, presenting three world premiere recordings of cello concertos by Vanhal, based on manuscript sources. In the case of the A major Concerto, he has himself made appropriate editorial additions for the missing viola and second horn parts for its second and third movements.

Szabó’s accounts of the outer movements of these concertos are charged with vitality and characterised by some stylish, pertinent cadenzas and stunning virtuosity in the cello’s stratospheres. He occasionally falls slightly short of the high standards of execution that one has come to expect of him, notably in technically challenging moments where tonal coarseness or off-centre intonation take the gilt off the gingerbread. However, he discovers in his readings a vast range of sonorities, articulations and nuances of text that many other soloists would miss, and he brings a classy elegance and poise to the central movements’ lyrical solo lines, especially in the A major work.

Sinfonietta Pannonica’s contribution is well turned and tasteful, even if the ensemble could occasionally be crisper and tidier. The recorded sound and solo–tutti balance are excellent. A real must for those seeking fresh, rewarding and inventive Classical cello repertoire.