The six classes of player

An article from The Strad, October 1918, provides a nuanced but provocative account of instrument tone 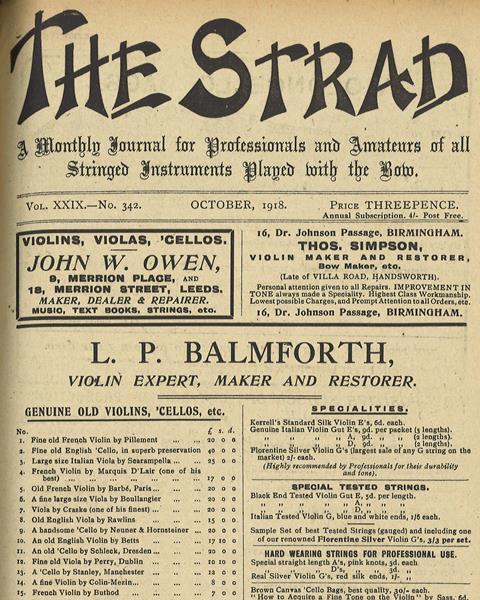 To the Editor of The Strad.

Sir, – In all the letters on the above subject that have yet appeared, one cardinal point seems to be overlooked, that is, that a player’s opinion of tone is governed chiefly, almost entirely, by the type of instrument his work demands.

Players may be roughly divided into six classes, viz., drawing-room players, home and orchestral combined, orchestral, solo, orchestral and solo combined, and quartet players. Now, to meet the requirements of any one single class is a comparatively easy matter; but to suit any combination, one is at once up against difficulties, and in most cases a compromise has to be accepted, if the player cannot pay the exorbitant prices charged by the dealers for an old instrument out of the common.

There are many satisfactory toned old instruments fit for drawing-room use, that is, of sweet pure responsive tone where volume and carrying power are not required, and almost all old Italian fiddles answer to these demands admirably; but mind, do not try to get any pressure on for a ff, or you will get a shriek. As fiddle men rather vulgarly say, “they have got no guts.” I once owned a Joseph son of Andrew, and a Ruggerius of this type, and one or two others also.

Now, a player accustomed to such tone, finds the full power of a good, robust instrument disagreeable at first, and has not only to get used to it, but to learn how to control it. An orchestral player must have power, and quality is a secondary consideration, as a certain amount of coarseness is lost in the general mass of tone. If the orchestral player is also doing an amount of solo work, then he must have power and quality, and it is here that he finds how few really good old instruments there are, and what huge prices he has to pay to secure one, and even then, he usually has to accept a compromise, in some form or other.

Then again, the quartet player requires another type of fiddle tone; it need not be very powerful, but it must be smooth, free, pure and sweet. Such a tone is pretty common amongst old Italians and a player accustomed to such a tone will no doubt feel dissatisfied with a robust solo, or orchestral tone, at first. Again, the quartet player may only perform privately in a small room, in which case his tone must be small, in comparison with that required by the professional quartet player publicly performing in a much larger place. Now, where these differences have to be reconciled, most players find it, I won’t say desirable, but unfortunately imperative, to use two instruments, one for each purpose, while the fiddle speculators, hoarders, or fanatics hug the gems they have obtained by reason of their superior wealth; but mind there are comparatively few great fiddles amongst even these. By great, I mean a violin with a tone fit for any purpose. These are few and far between.

As your correspondent Mr. Wilson truly says, most of them are too thin and give out shaky notes, for they were made to suit the ancient pitch, nearly three notes lower than the modern, and this necessitates correspondingly thinner plates to produce the lower pitch, and when the thin old instrument is tuned up to modern requirements with the increased string pressure, it starts to scream out, and no wonder.

The modern fiddle can be made free from this defect, and if good old wood be used, together with knowledge and brains, it must be superior to the poor old tortured instrument of other days.

Of course some financially interested owners of old Cremonas are to be expected to dissent from any proof, no matter how convincing to the unprejudiced listener or player, and tests are the only effective means to remove the hoary prejudice and tradition which retard progress, and violin making.