As Yale School of Music announces the official retirement of the 99-year-old cello guru, we look back at some of the inspiring quotes from an interview for The Strad conducted by one of his most illustrious students, Ralph Kirshbaum 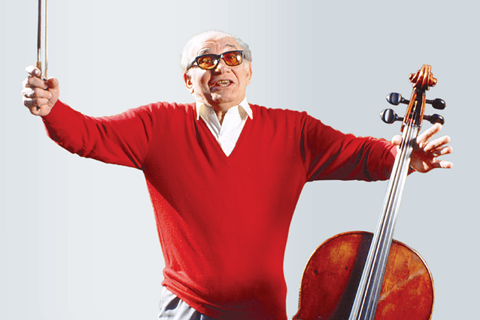 On 19 July 2018, Yale School of Music announced the retirement of the Brazilian born American cellist and pedagogue Aldo Parisot after 60 years on the faculty. Among Parisot's students was Ralph Kirshbaum, who conducted an extensive interview with him for The Strad in the September 2011 issue. The following are extracts from that interview

On finding your own voice

Music making is so abstract. There is no so such thing as an answer to how to phrase something. I learnt to be a better teacher when I stopped playing in front of my students. There are many people who imitate their teacher. I hate the idea that there's someone in the world who sounds like a little Aldo Parisot. You've got to be yourself. We've all got to find our own way.

On learning from students

I give you my idea, but it doesn't mean you have to imitate me – it's a point of departure. That's the way I teach. I learn from my own students. Every day they surprise me. They come and do something and I think, 'Why didn't I do that before? I never thought about that.' 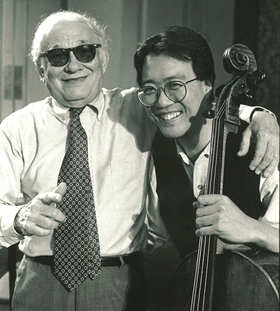 Parisot with Yo-Yo Ma and, below, with Kirshbaum

On selling yourself as an artist

If I have a student who wants to become a soloist, I encourage them to tell the public, 'Here is my message', and to be a bit of a showman.

When Rostropovich first came to the US in 1957, he didn't make a success at Carnegie Hall. I was there: it was incredible playing, but sedate. When he got back from the tour his manager Sol Hurok said, 'I know nothing about cello playing, but I heard your tour wasn't a success. I can't re-engage you unless you do something to make yourself a success. America is a country of show business. Unless you do something, I can't sell you.'

When Rostropovich came back to America, I was there to listen to him and I couldn't believe it. He entered the hall very quickly, sat down and was playing straight away. It was if he had hit me on the head with a hammer, it was such a shock. He was an entirely different man to the one I remembered. He was smart, because he kept doing that and it was incredible show business. Hurok was right.

I try to make students believe in themselves, and that includes without the cello. Sometimes it takes a few months for the person really to show who they are. There's some psychology to this. If I know who they are as a person I can help more. Some people are shy. I'm not – I'm full of life. I'm not 90 years old – I'm only 60 and I will be until I die.

And I want them to be that way – to be fresh the whole time. I tell them of my experience. When I was 18, I was so shy. One day, I decided that I wasn't going to be shy any more. I went and talked to people and started being not shy. It's as simple as that. It's up to you. 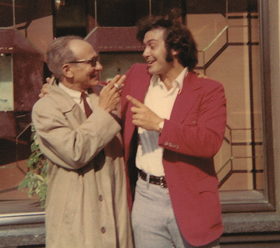 On giving your all as a musician

I want students to understand that music college is a Walt Disney dream land. Real life starts when they get out of here. Everything is black. Every door is shut. It's tough as hell. You've got to be responsible and it starts right here.

I set an example. I've been teaching at Yale School of Music for 50 years and I was never one minute late for a lesson. I leave home one hour ahead of time and I'm there twenty minutes before the lesson.

Another example: if you're playing in orchestra, regardless of whether you like the conductor your job is to do it well. You have to do the maximum, to squeeze yourself, no matter what you do in life. Please yourself, be happy, but don't regret anything.

If you do your best when you're young and try the hardest to fulfil your dreams but you don't succeed, then at least when you reach 80, you can say, I didn't succeed as I wanted, but I know I tried.

Read: 9 opinions on performance and career by cellist Yo-Yo Ma

Read: 8 opinions on performance and career by violinist Ivry Gitlis