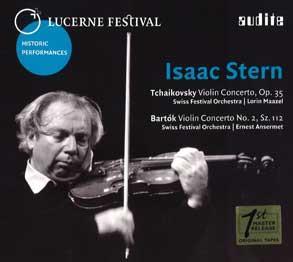 Taped at the Lucerne Festival when Isaac Stern was at the height of his powers in 1958 and 1956 respectively, these sophisticated mono recordings capture a white-hot incandescence fully equal to his legendary commercial releases with Eugene Ormandy and Leonard Bernstein for CBS/Sony respectively. Even in an age overflowing with note-hungry virtuosos there are few who could come anywhere near this blistering account of the Tchaikovsky, with the young Maazel somehow sticking to his distinguished soloist like glue, apart from a couple of passages in the finale when Stern goes into free-flowing tempo meltdown. The cuts that were then traditional are made, plus a real jolter that excises the entire final orchestral crescendo. Ultimately the Ormandy studio recording reigns supreme, yet all Stern fans should hear this stunning live account.

The Bartók is on a similar plane of intensity and here I wonder whether this is actually a case of more being less. By placing the work firmly in the line of the great Romantic concertos, Stern brings a profound ripeness of expression to bear on music that walks a tantalising musical tightrope between the past and the future. Ansermet typically plays it cool (not always immaculately), whereas Stern pushes the musical temperature gauge skywards, so much so that just before the end of the first movement you’ll hear a crack as his E string snaps under the pressure.