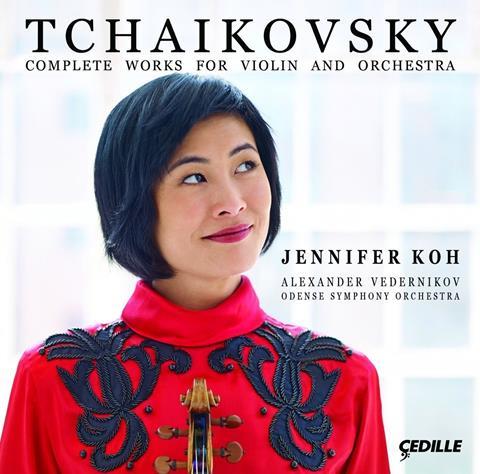 For those who feel repulsed by schmaltzy Tchaikovsky performances, this disc from Jennifer Koh might prove an effective form of aversion therapy. Resisting a stereotypically ample Romantic sonority, she nevertheless manages to celebrate the richness of the composer’s melodic invention, focusing on the gift itself rather than any ostentatious wrapping.

Her mellow tone, coupled with a light portamento in the opening of the early Sérénade mélancolique, leads to a highly listenable lyrical thread, with plenty of focus on the sound itself. Elsewhere, for example in the first movement of the Violin Concerto, she employs tonal colouring to impressive effect. What is lacking, though, is a sense of playfulness: the lighter, more capricious passages, not least in the Valse-Scherzo, tend to be under-characterised and there are sections that could benefit from a touch more showmanship.

The Souvenir d’un lieu cher, orchestrated by Glazunov, completes the disc. If the opening of its central scherzo movement races ahead with energy and detail, its second section needs more whimsy. With the pot-boiling third-movement Mélodie, Koh returns to quietly but absorbingly lyrical home ground. Recorded with good balance and detailing, this disc may prevent skin-crawling in Tchaikovsky cynics but it might also leave you yearning for a dose of pyrotechnics.