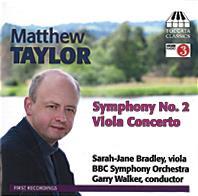 The Viola Concerto by London-born Matthew Taylor (b.1964) was written in 2010 and premiered by Sarah-Jane Bradley the following year. Its five short movements are reflections on both Sibelius’s Humoresker for violin and orchestra and Schumann’s piano piece Humoreske op.20, which probably accounts for Taylor’s unusual spelling of the word in English.

The concerto begins with the solo viola interacting with high woodwinds, a combination that creates some magical sonorities. A humorous scherzo – over in no time – features prominent piccolos.

The central Larghetto achieves great heights of expressiveness, as does the Molto adagio that leads into an exuberant finale (marked Allegro riotoso). Bradley has made the piece very much her own and negotiates with great aplomb its frequent excursions into the viola’s upper register, as well as its idiomatically written double-stops.

Both Taylor’s Concerto and his Second Symphony – an even more impressively constructed composition – receive here definitive readings that have been most faithfully recorded.