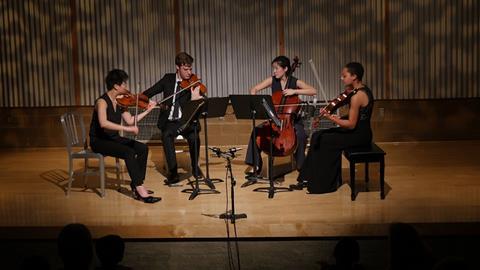 Fine instrument and bow auction house Tarisio has announced four of the recipients of its 2017 Tarisio Trust Young Artists Grants.

Launched in 2015, the annual initiative offers funding and publicity for innovative string-based projects, shaped and driven by young artists. Each grant is worth $5,000.

The two former Juilliard School violinists 'perform music by artists who faced adversity in their lives and communities'.

The music festival will mark its third season 'by giving 32 young artists (aged 17-30) from all over South America the chance to work closely with members of the Juilliard String Quartet, Astrid Schween and Roger Tapping'.

A visual album of six newly composed works, 'all of which feature the use of extended techniques, specifically focused on the bow'.

A fifth winner is to be decided via an online vote from a shortlist of 12 string players - read the shortlisted candidates’ proposals on Tarisio’s website. Voting closes on 6 July 2017.