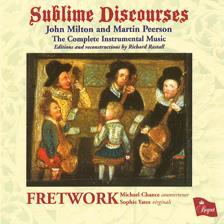 Viol consort music was big business in early 17th-century England. Fretwork’s latest disc features two of the multitude of composers who turned their hand to it: John Milton, father of the poet, and MartinuPeerson, a cleric, both of whom lived in London in the shadow of the old St Paul’s Cathedral. The editions have been reconstructed by Richard Rastall.

Fretwork’s six members bring to life the enjoyment that the original players of this very sociable music must have felt. The Fantasias have a sense of lively discourse and exchange of ideas, while the Almaines, with their declamatory openings, have a dance-like swing and lively rhythms that the players relish. Michael Chance’s countertenor line in the single In nomine is hard to pick out among the intricacies of the viol parts dancing around it.

The ensemble sound is intense and glowing, the acoustic close and almost stuffy, giving a domestic feel to the recording. This effect is heightened by the players’ positions as explained in the booklet: facing inwards as if around a table, as contemporary paintings and partbooks show viol consorts to have played, rather than in the arc usual for performances today.

The disc was the last made by Fretwork founder member and tenor violist Richard Campbell, who died in March 2011.