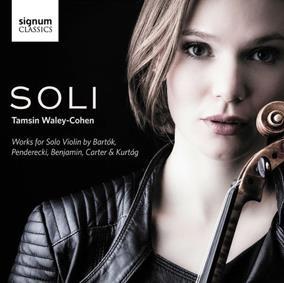 The opening Chaconne of Bartók’s adieu to music is spaciously conceived by Tamsin Waley-Cohen (taking 14 minutes to the 9 of its dedicatee Menuhin), without the vernacular roughness of a player such as Kelemen (Hungaroton), though no less confrontational in the implacable exchanges of the ensuing Fugue.

The thread of the third-movement Melodia is almost lost among a searching exploration of Bartók’s night-music labyrinth and the pulse of the final Presto is slightly unclear. It is a modernist reading and one well suited to the context of a recital which plays on the loneliness of a solo musician’s lot more than their place at the centre of attention.

Almost all the other works here are brief tributes to the living or elegies to the dead, in which the composer speaks to their object of memory or affection with angular lines but direct expression. Waley-Cohen never loses poise but she could afford to be freer and more vocally spontaneous as Kurtág remembers Cage and Carter recalls Copland; she sounds more at home in the four-dimensional complexity of Benjamin’s Canon for his publisher Sally Cavender. Only the Cadenza by Penderecki feels out of place and over-extended, albeit partly redeemed by attack and intonation of pinpoint accuracy.