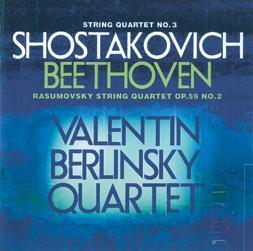 The Valentin Berlinsky Quartet, named after the founding cellist of the legendary Borodin Quartet, goes from strength to strength with a beautifully engineered coupling that finds both composers pushing back the barriers. In the second of his three ‘Rasumovsky’ quartets, Beethoven continues his middle-period experimentation with harmonic–temporal expansion, something that is often misinterpreted as an opportunity for introspective indulgence. Not so here as the Berlinsky players throw themselves into the fray with a youthful athleticism and urgency that fully captures the music’s revolutionary spirit. The finale, for once taken as a true presto, flashes past with a gossamer transparency that suggests the teenage Mendelssohn in his prime. Rarely have Beethoven’s startling sleights-of-hand felt so tinglingly alive and bracingly subversive.

Shostakovich’s Third Quartet, another work whose surface gestures should never be taken at face value, proves the perfect companion. The music’s semantic double-takes are often dispatched with a furrowed-brow intensity that allows little room for light and shade. Yet the Berlinsky players, with exquisite timing and a musical skip in their collective step, triumphantly demonstrate that less is often more by imparting an impish quality to the composer’s sardonic gestures, which sound all the more ghoulishly humorous as a result. A triumph.