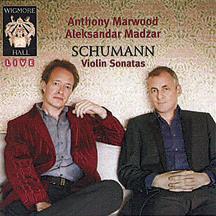 One of Schumann’s countless innovations, still sadly underappreciated, was his mould-breaking tendency to create expressive structures with their own internal logic. In the violin sonatas Gidon Kremer (Deutsche Grammophon) first broke the interpretative mould with his flautando reverie, yet it was Carolin Widmann (ECM) who in giving herself entirely to the music’s emotional impulses proved a revelation in late Schumann. Anthony Marwood has already recorded the first two sonatas (along with the op.94 Romances) with Susan Tomes for Hyperion, readings that strike a near-ideal balance between content and structure. Yet, recorded live at London’s Wigmore Hall, he demonstrates an even greater sense of fantasy and desire to probe the composer’s restless creative spirit.

Balanced more discreetly, almost at times as though the violin is emerging from Aleksandar Madžar’s swirling piano textures, any misguided sense of these being violin-led sonatas is dissolved in poetic lines of yearning intensity. Marwood’s tonal purity and chamber-scale intimacy really come into their own in the final sonata, whose occasionally fractured musical changeability poignantly reflects the composer’s struggles with mental illness at the time.

Here the music is experienced as wave upon wave of heady inspiration, moving above and beyond the strictures of Germanic formal procedure, providing an essential musical template for the fast-emerging Nationalist schools.