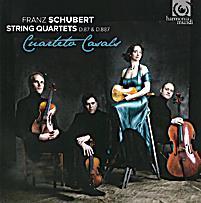 From the mysterious opening of the G major Quartet, a score of epic scale whose length exceeds most symphonies of the period, the Casals Quartet fills its performance with imaginative insights. The many changes of mood in the opening Allegro molto moderato are so perfectly knitted together as to remove the episodic approach we often hear. Dynamic shading is achieved with perfect unanimity and exactitude, a fact that colours the following slow movement where the inherent menace erupts with considerable potency.

The articulation is immaculately clean in a scherzo that is vibrant but never hurried. The players’ approach to the finale is light and mercurial, almost to the point of sounding like Mendelssohn. Throughout, the tonal quality is gorgeous, the fortissimo passages are never forced and one can only admire the precision of their intonation.

Even the Casals cannot do a great deal for the E flat major Quartet from Schubert’s 16th year. The players inject as much drama as the first movement can reasonably take, and their account of the scherzo, with its evocation of a braying donkey, is always in good taste. The work culminates in cheerfulness, with leader Vera Martínez Mehner’s left hand flying around the fingerboard with unfailing accuracy. A highly recommended release, one in which the recorded sound matches the beauty of the playing.