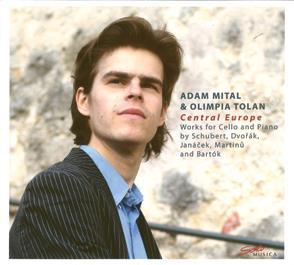 This programme of central European music fulfils a long-cherished plan by Swiss cellist Mital, who is, he writes, particularly attracted to the music of the region – perhaps through his studies with Miklós Perényi in Budapest, and the Romanian origins of his wife and duo partner, Olimpia Tolan.

Mital, who has recently stacked up a number of prizes in top competitions, opens with a graceful, dignified Arpeggione Sonata, beautifully expressive within its stylistic confines, and with a pleasing sound in the frequently visited high registers of the A string. The opening of the finale feels enveloped in warmth, with the gutty, burnished sound of Mital’s cello closely recorded throughout.

Dvorák's Silent Woods offers a more Romantic intensity, which Mital’s playing fully embraces; though in the same composer’s Rondo, the breathy whistle as he luxuriates in the lyrical middle section is unfortunate. He and Tolan play throughout with a relaxed intimacy, and really get under the skin of Janácek’s Pohádka, with some particularly poetic piano playing from Tolan.

Martinu’s Variations on a Slovak Theme receive a fiery performance full of excitement and rhythmic impetus. There’s a wonderful feeling for authentic folk rubato in Bartók’s Romanian Folk Dances, in Mital’s own arrangement based on the violin and piano version by Székely.