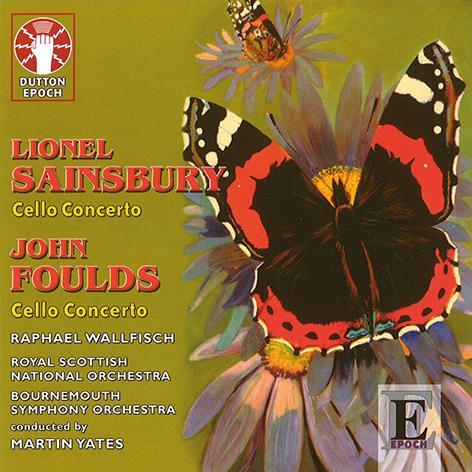 Raphael Wallfisch continues his foray into lesser-known British concertos with two impressive recording premieres of works written nearly a century apart. Both concertos, written in a tonal idiom, have undoubted audience appeal.
Lionel Sainsbury’s vibrant Concerto of 1999 is heart-on-sleeve music, painted in bold colours, and could hardly find more enthusiastic interpreters than Wallfisch and the Royal Scottish National Orchestra. The soloist’s role here is one of an extrovert leader and Wallfisch, recorded well to the fore, brings vitality and a range of emotion to the part, his beautifully focused sound taking on an urgency in its high reaches in the first movement and soaring eloquently in the intense slow movement.

John Foulds’s Concerto, written in the 20th century’s first decade when he was a cellist in the Hallé Orchestra, has a more reflective solo part that enters with meditative, strummed pizzicato chords. The work is full of attractive melodies, particularly enjoyed by the strings of the Bournemouth Symphony Orchestra in this spacious recording. In keeping with the nature of the solo part, which often takes a back seat with cross-string passagework, Wallfisch’s sound is not recorded quite so prominently, but his improvised cadenza in the finale, brilliantly executed, takes his cello through ever more virtuosic heights of double-stopping.