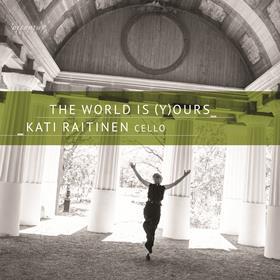 Works: THE WORLD IS (Y)OURS Music by Clyne, Sibelius, Fujikura, Rautavaara, Ullén and others

Kati Raitinen is the Finnish solo cellist at the Royal Swedish Opera, and a musician with plenty of the passion, stamina and emotional gregariousness that business of opera demands. She has assembled a fresh-faced recital that feels resolutely 20th- and 21st-century until the copious links to Bach reveal themselves.

Raitinen’s tone, from an unknown instrument probably made in Rome around 1750, is immediately ingratiating. It brings off the recitations of Anna Clyne’s Rest These Hands (the piece benefits from being lowered from violin to cello) with the fervour of a true storyteller. There’s a lovely open quality to Sibelius’s Theme with Variations (good to hear this heartfelt if flawed rarity from 1887) and a pleasing focus in the moto perpetuo disguising an Adagio that is Dai Fujikura’s Eternal Escape.

The solo sonata by Rautavaara is the centrepiece, its all-double-stopped opener sometimes pushing the cellist into discomfort, as does the end of the Molto allegro (despite the striking, tender colours she finds high in her register). Johan Ullén’s The Dark Triad is a set of tango character pieces describing the psychopathic, narcissistic and Machiavellian. The music doesn’t always fit the characters (aren’t psychopaths supposed to be calm, quiet and manipulative?) and Raitinen is too emotionally embracing to convince you she could be any of those things. Accordingly, leave the last track on and you’re treated to a ‘secret’ menu of joyous, collaborative cello works (perhaps multitracked) that feel very ‘her’ and include her speaking voice. They could be improvisations; they could be Giovanni Sollima. Answers on a postcard please.