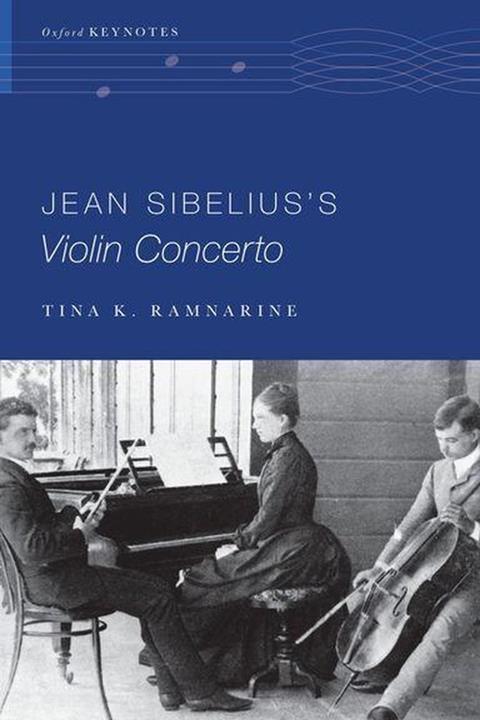 Sibelius’s Violin Concerto underwent its birth pangs in public. Its original version (1903/4) divided audience opinion but suffered the carping of critics such as Karl Flodin and was extensively revised. Contrary to the probable expectations of her targeted readership of performers, curious listeners and advanced undergraduates, Tina Ramnarine eschews microscopic analytical examination of the work’s two versions in favour of a more telescopic appraisal of their genesis, consistently focusing on key contributors to its creation, cross-genre practices that influenced Sibelius’s creative thinking and the importance of nature in his aesthetics and musical ideals.

Having discussed Sibelius’s early training and musical life in late nineteenth-century Helsinki, Ramnarine charts the concerto’s historical background, taking into consideration the influence of Leopold Auer and the Russian violin ‘school’, the heightened Finnish nationalism of the period and the Finns’ opposition to Russian imperial policies. She raises the notion of Sibelius, and more generally the virtuoso, as a political figure and demonstrates how the political minefield enveloping Sibelius worsened in Germany following his uneasy relationship with the Third Reich and Theodor Adorno’s post-war denunciation of his music. Her examination of recordings since Jascha Heifetz’s seminal 1935 account is necessarily selective but appropriately transnational and she incorporates illuminating feedback from the composer regarding some interpretations. Ramnarine also considers the pioneering efforts of, for example, Maud Powell, Ginette Neveu and Ida Haendel in creating a career path for female soloists; but she surprisingly makes light of BIS’s success in persuading Sibelius’s family to lift its embargo on the concerto’s original score and allow the recording of both versions, eventually by Leonidas Kavakos. Her final chapter discusses Sibelius’s legacy as a creative catalyst in Finland and further afield and the importance of the International Sibelius Violin Competition in the concerto’s global transmission.

The book’s companion website furnishes additional information about three significant topics: nature as a major source of Sibelius’s creative inspiration; the influence of Finnish folk song on his concerto and the cross-genre insights of violinist Pekka Kuusisto; and violin pedagogy, focusing particularly on the emphasis by early twentieth-century violinist-pedagogues such as Kató Havas and Yehudi Menuhin on countering stage fright and promoting well-being, relevant here because of Sibelius’s own performance phobias as a violin virtuoso manqué. Several YouTube links are also provided to relevant documentaries, verbal commentaries and historical recordings by musicians such as Auer, Powell, Haendel, Willy Burmester and Cecilia Hansen, as well as Jascha Heifetz’s (1935 and 1951) and Finnish violinist Anja Ignatius’s (1943) accounts and David Oistrakh’s (1966) and Ignatius’s (1952) ‘live’ performances of the concerto.

Many readers may sense a lacuna in this book’s content, given that it includes no substantial analytical description of the concerto and its musical evolution. A more in-depth examination of the rhapsodic original version would certainly have given more weight to Ramnarine’s view of the work as a ‘labor [sic] of virtuosity’, as most of Sibelius’s amendments were geared towards simplifying its technical demands and achieving greater structural cohesion. Doubtless she would claim that Erkki Salmenhaara, Erik Tawaststjerna, Jukka Tiilikainen and Timo Virtanen, among others, have already espoused such aspects adequately elsewhere and that her broader-gauged approach plugs significant other gaps in the work’s literature. Her short handbook is well presented (only two typographical errors were noted), includes a handful of pertinent images and music examples and draws on a wide range of archival and other sources, many reflecting her own social science interests. The concerto’s most intimate musical companion it may not be, but it does serve as an accessible guide to a greater understanding of the work and the various social, political, cultural and other aspects surrounding its creation and reception.