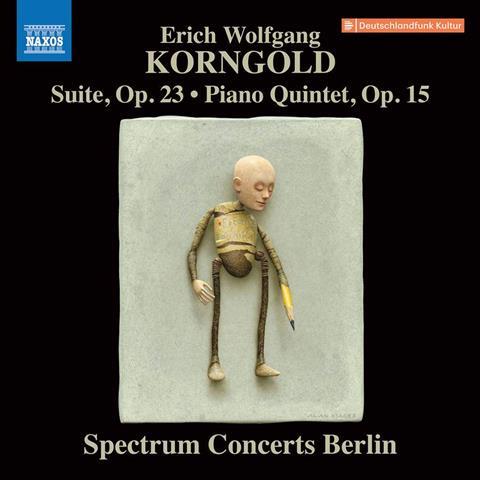 Korngold wrote both of these chamber works in the wake of his two most significant operatic endeavours: Die tote Stadt in the case of the Piano Quintet (1921), and Das Wunder der Heliane for the Suite (1930). But any sense of relaxation after his theatrical projects is expunged by the full-on musical and dramatic ebullience and sophistication of these two smaller-scale scores, both of which challenge the listener’s ears in their wealth of almost ‘operatic’ event as much as the performers themselves when faced with their intricate part-writing, virtuoso demands and almost constant rubato. The players of Spectrum Concerts Berlin – a flexible chamber ensemble along the lines of, say, the Nash Ensemble in the UK – demonstrate complete mastery of these challenges in performances (captured in richly integrated recorded sound) that constantly dazzle and beguile.

The Suite for two violins, cello and left-hand piano (composed for Paul Wittgenstein and members of the Rosé Quartet) often sounds in danger of becoming a miniature piano concerto, but the strings here hold their own, with some especially witty and chameleon-like playing in the central Groteske movement. The sense of ensemble in the Quintet is impressive, with the best of the string playing in the poignant variations movement, conveyed with both warmth and emotional depth.