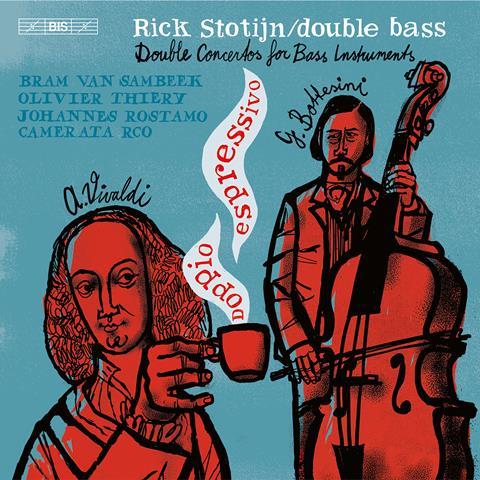 Rick Stotijn’s prowess lies not only in his assured technical fluency but also in his interpretative imagination, tonal diversity and instinctive ability to communicate. Apart from Ernst’s lyrical Élégie, poignantly conveyed, and Anastasio’s aria from Vivaldi’s Il Giustino, carefully phrased and coloured by Sören Leupold’s stylish theorbo contribution, he turns collaborator in this varied programme of arrangements for two soloists, strings and, where applicable, continuo. He and cellist Johannes Rostamo despatch with aplomb the energetic allegros of Vivaldi’s Double Concerto RV531 and imbue its central Adagio with poetic lyricism. Stotijn is joined by bassoonist Bram van Sambeek for Vivaldi’s Double Concerto RV409 and Bottesini’s Duetto, both works charismatically performed with a mix of refined melodious playing and sparkling virtuosity.

You can sense a real chemistry between Stotijn and fellow bassist Olivier Thiery, whether it’s in their flexible repartee in Bottesini’s operatic La serenata or their winning partnership in his Passioni amorose, displaying full mastery of its recitatives, arpeggiated harmonics and other virtuoso challenges. The one-per-part string ensemble responds alertly to the soloists’ subtle nuances and freedom of pulse; occasionally, though, as in the dramatic opening Allegro of Passioni amorose, it seems to lack sufficient body. The recording has just the right mix of clarity and bloom.