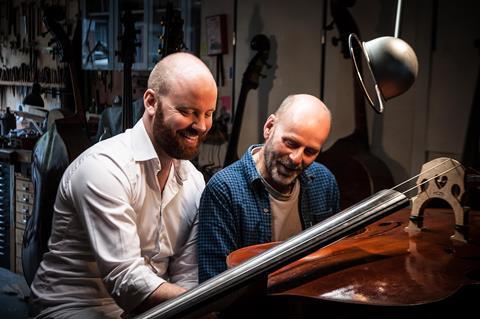 ‘I have eight basses,’ says Stotijn. ‘I try to choose the instrument that suits the repertoire. My favourite one for solo playing, which I used to record Doppio espressivo, is actually a mixture of old and new. The front, two of the ribs and the scroll are English, of the Panormo school. The rest is new, by Barnabás Rácz in Hungary. It sounds amazing. It has a beautiful colour and sound and it’s really good for solo playing, and also chamber music.’

He recently returned a Raffaele & Antonio Gagliano that he had on loan from the Dutch Musical Instruments Foundation for a decade. ‘It’s a fantastic instrument, but for solo playing it isn’t ideal. The shoulders are quite big and it’s very deep. It’s much more of an orchestral instrument. I was doing an increasing number of solo concerts and the repertoire became more and more difficult. So I had to climb up on the shoulders the whole time and it was just a little bit too big.’

Stotijn is on the lookout for a new main solo instrument, with the backing of the foundation. ‘We tried a Matteo Gofriller and an Enrico Ceruti and some other very high-profile makers,’ he says, but so far there’s been nothing to beat the hybrid Panormo–Rácz bass.

His main orchestral instrument is a John Frederick Lott I, assumed to date from the time he worked for Thomas Dodd. ‘I love English basses. This one has a rich, chocolatey, nutty tone.’ He has recently commissioned a copy of it with a detachable neck from Cologne-based maker Paul Benjamin Griesshaber. ‘It has become nearly impossible to fly with a bass nowadays, so I’m always on the lookout for solutions.’

I love English basses. This one has a rich, chocolatey, nutty tone

When Stotijn was principal of the Berlin RSO, he played a five-string bass by Mittenwald maker Anton Rieger – ‘a gigantic bass with a whole bass section inside soundwise’.

Other instruments include a 2014 bass by Amsterdam luthier Harry Jansen, who has been a close friend of the family for years, and whose workshop Stotijn has fond memories of visiting as a small boy. Jansen previously built a small bass for a ten year-old Stotijn when he joined the Utrecht Conservatoire junior department, and is now building an instrument for the Robert Schumann Hochschule Düsseldorf, where Stotijn teaches.

In terms of strings, on the Lott bass, Stotijn (who’s a Pirastro Artist) has found that Pirastro Eudoxa ones bring out the best in the instrument. On other basses he mostly uses Pirastro Flexocor Deluxe.