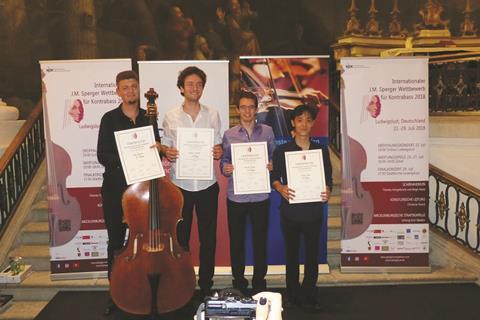 In the mid-18th century, the Mecklenburg-Schwerin family envisioned the small north German town of Ludwigslust as a ‘Versailles of the north’. It never quite reached that grandeur, but the town’s castle and church (both used as venues for the biennial International J.M. Sperger Competition for Double Bass) and the surrounding fountains and grounds reflect a proud history – one that was somewhat tarnished by the establishment nearby of a concentration camp towards the end of the Second World War.

Ludwigslust is the source of much vital history for the double bass. For the last 23 years of his life, Johann Matthias Sperger (1750–1812), one of the most significant bassists of the Classical period, was appointed to its court orchestra, where he enjoyed support, security and inspiration that allowed him to flourish.

In addition to his work in court orchestras and as a soloist, he composed some 45 symphonies as well as numerous works for bass, including 18 concertos, 4 sonatas and many viola and bass duos. The Sperger competition and the work of its founder, Klaus Trumpf, have helped to focus the spotlight on this composer’s music, with at least two sonatas and one concerto having become mainstream repertoire for the bass.

Sperger’s greatest contribution to the profession, however, is the collection of manuscripts he amassed throughout his life. These were willed after his death to the state library in nearby Schwerin, where they reside to this day. The majority of bass concertos written in the Classical period are preserved therein, including works by Vanhal, Pichl, Dittersdorf (with cadenzas written by Sperger) and many others, as well as Sperger’s own complete works.

Access to the library was limited during the days of the Communist stronghold, but with the fall of the Berlin Wall in 1989 came new opportunities to reclaim the past and share hidden treasures with the world. Thanks to the incredible foresight of Sperger, works that had long been forgotten have again come to attention, and are now studied and performed.

Ludwigslust has honoured Sperger with a plaque on the wall of his former residence, with a street and music school bearing his name and with a new life-size bronze statue, which was unveiled at this year’s competition during a concert featuring a performance of Sperger’s Romance for solo bass and bass quartet by jury members. 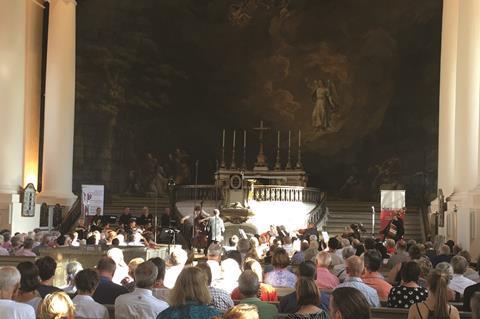 Andreas Ehelebe performs for a packed crowd in the sweltering heat

Overflowing church audiences, who endured temperatures of 35 degrees to witness the superb artistry of the finalists, reflected the town’s love of music and its support for the competition – which this year took place from 22–29 July. First prize of €8,500 and an all-expenses-paid trip to New York was won by Germany’s Andreas Ehelebe (b.1994), a student of Dorin Marc at the Hochschule für Musik in Nuremberg.

Second prize of €4,500 went to his compatriot Alexander Weiskopf (b.1995) of the Bavarian Radio Symphony Orchestra academy in Munich, and the third prize of €2,500 went to South Korean Yomoon Youn (b.1994). A number of concert engagements throughout Germany are shared among the top three prizewinners. The fourth prize of a two-year loan of a new Stefan Krattenmacher double bass was awarded to Igor Šajatović (b.1998) from Croatia.

The compulsory work for this year’s competition was Caprice, a new piece specially written for the event by jury member Tabakov, who also conducted the final-round concertos with orchestra, providing him with a unique perspective for judgement. Asked if his experience of the finals changed his view of the performers and their ranking, he commented that there was a noticeable difference between the two rehearsals and the performance, but that his final vote reflected his assessment of the first three rounds.

Jury member Hutcap was so taken by Caprice that she immediately started transcribing it for the violin! However, it offered extreme technical and rhythmic challenges to the bass players, which were amplified by the fact that they had only six weeks to learn it.

Considering the stature of the jury, the large cash awards, the supplemental prizes of bows and basses and the many performance engagements on offer, this is a competition that should be coveted by all aspiring bassists.

A fast tempo marking in the many semiquaver passages took the player from the very lowest to the highest range of the instrument at great speed, causing the composer to reflect that perhaps he had been a little ambitious in terms of tempo. Ultimately, the complexity of the driving Bulgarian rhythms (one eight-bar phrase includes the time-signature progression 4/4 – 3/4 – 3/8 – 2/4 –5/8 – 7/8) caused problems for every candidate and the work still awaits a completely accurate performance.

Of the 46 competitors in Ludwigslust, 43 played with a German bow and only one came from across the Atlantic. In this day and age of vast knowledge, international sharing and acceptance of diverse playing methods, this is absurd.

The Sperger contest is designed to be embraced by the entire bass world. Considering the stature of the jury, the large cash awards, the supplemental prizes of bows and basses and the many performance engagements on offer, this is a competition that should be coveted by all aspiring bassists.

In many competitions, faster and louder wins the day, and there was plenty of such playing on show here. Evidently, the future of bass playing is in excellent hands, however, as solo playing continues to evolve towards greater artistry.