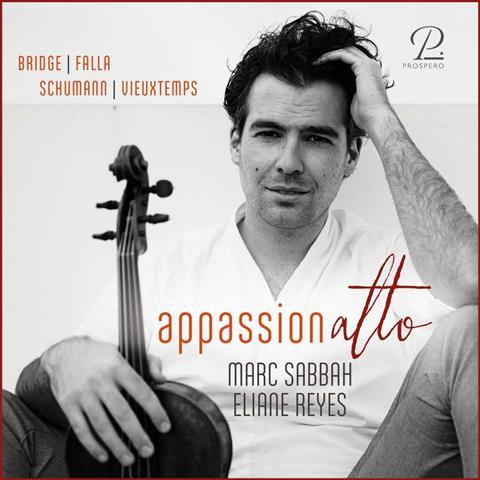 ‘Not another Märchenbilder!’, was my first reaction when this CD landed on my doormat. About ten seconds into the piece, however, any such thoughts vanished. Marc Sabbah – born in New York, based in Belgium – plays the opening phrases with compelling, almost unbearable intensity. He and his piano partner are on the same wavelength, realising Schumann’s myriad instructions and embellishments with absolute naturalness. The horn-call effects in the second movement resound triumphantly, and the rushing triplets in the third bounce obsessively, before peace is achieved with the soothing C-string sounds of the final lullaby.

Sabbah and Reyes build up Vieuxtemps’s Élégie to a tremendous climax, for once justifying the piece’s bombastic coda as a logical conclusion. The violist’s veiled sound in Bridge’s Pensiero contrasts effectively with the harder edge he finds for the following Allegro appassionato. As with the Vieuxtemps, Sabbah adheres here for the most part to the violist–composer’s original fingerings. Falla’s songs have been variously arranged for strings (the famously fastidious composer gave his blessing to Paweł Kochański’s violin transcription, which was subsequently adapted for the cello by Maurice Maréchal), but Sabbah performs them as they are, without any additional thrills or frills, and for that reason they go straight to the heart. The violist’s engaging booklet notes further enhance this lovingly produced album.