Tim Homfray hears a performance from St Martin-in-the-Fields, London, on 21 May 2021 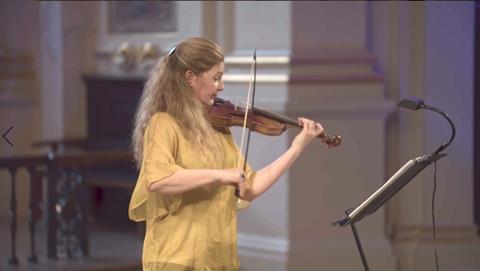 Rachel Podger recently arranged and recorded all of Bach’s Cello Suites, and she opened here with the Second, transposed from D minor into A minor. She has the gift, which she demonstrated repeatedly in this concert, of elucidating shape, expression and structural clarity while appearing to do very little: just some dynamic shading here, a touch of judicious rubato there. The opening Prelude was eloquent and full of detail, and the Allemande and Courante were airy and dancing; the Sarabande was serene and reflective, and the two Menuets and Gigue were sprightly and flecked with ornament.

In the opening Andante of Tartini’s B minor Sonata Piccola, Podger maintained a singing narrative line through the complexities of both Tartini’s writing and her own inventive ornamentation; she skipped through the angular leaps and double stopping of the Allegro Assai and gave the final Giga the feel of an improvisation. In Biber’s Passacaglia she demonstrated the immense authority of one who knows the work inside out, revealing it in all its many colours, its intimacies and its touches of playfulness. She ended with Bach once more, her own transcription of his A minor Flute Partita BWV1013 (taken down a tone), as beautiful and satisfying as all that had gone before.