There’s a wartime vibe in this well-coordinated Quatuor 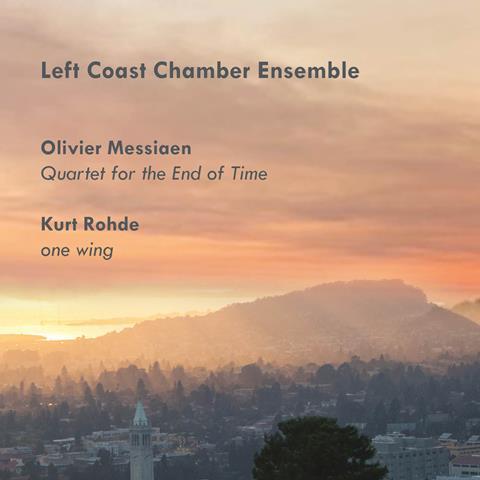 Description: There’s a wartime vibe in this well-coordinated Quatuor

Recorded live by the San Francisco-based Left Coast Chamber Ensemble in February 2020, this sprucely executed performance of Messiaen’s Quatuor has the probably unintended effect of referencing the circumstances of its wartime premiere in a rather airless acoustic that brings to mind the congested conditions of prison huts, with a rather clangy piano sound to boot. After a first movement where the individual lines struggle to emerge from the haze of birdsong and melody that Messiaen creates, things improve as the textures thin out, and the long stretches of unisons and octaves conceivably benefit from aural close focus, though Jerome Simas’s well-paced clarinet solo could do with more air around the sound.

The duo between Anna Presler’s violin and Tanya Tomkins’s cello in the ‘Vocalise’ is so tightly coordinated that we could be listening to a single player. Elsewhere, Tomkins’s first ‘Louange’ sounds just a little saccharine, but the melody of Presler’s final movement is exquisitely spun, with sincerity and purity in equal measure (though pianist Eric Zivian could be tighter in his double-dotted rhythm).

Kurt Rohde’s one wing of 2019 makes a pertinent filler, inspired as it is by the angel music in Messiaen’s St François d’Assise; it is more spaciously recorded in a different venue from the Quatuor. Here the violin and piano (the well-focused Presler and Zivian) converse in florid reams of melody that only ‘meet’ each other tangentially – a musical allegory of the human relationship with the divine.