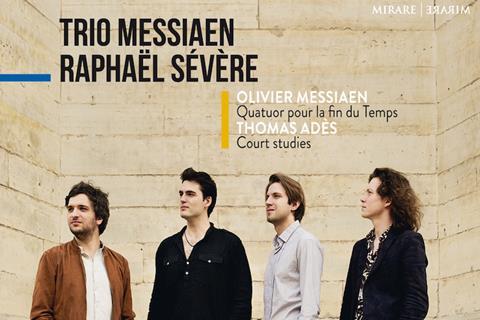 The Messiaen Trio joins forces with clarinettist Raphaël Sévère for the seminal Quatuor pour la Fin du Temps, with the pleasing addition of the ‘Court Studies’ from Adès’s The Tempest as the opener.

Composed for the same forces as the Messiaen, these lithe studies conjure up six of the characters from his opera. The players revel in the gorgeous, rich textures and dancing rhythms of the two opening movements – ‘The False Duke’ and ‘The Prince’ – against which the spectral and eerie third study, ‘The King’, is deliciously restrained. In the melancholy beauty of the finale, ‘The King’s Grief’, cellist Volodia van Keulen gives full weight to the cello’s swelling, lamenting phrases.

Messiaen’s Quatuor, famously premiered in a prisoner-of-war camp in Nazi Germany, is given an eloquent and expressive reading, buoyed by the warmth of the recorded sound. Power and intensity are in evidence throughout, the only disappointment being that the piano is slightly too forward in the recording for the first majestic ‘Louange’, losing something of the effect of van Keulen’s ecstatic outpourings.

The closing ‘Louange’, for violin and piano, achieves the heights the first one so narrowly missed, beautifully paced and ardently performed by violinist David Petrlik, with well-judged accompaniment by pianist Théo Fouchenneret.