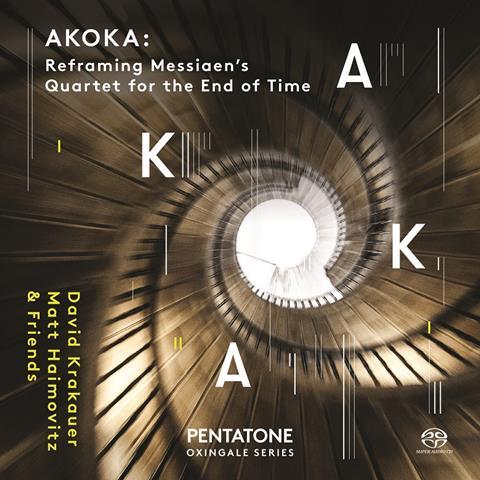 Matt Haimovitz’s disc is subtitled ‘Reframing Messiaen’s Quartet for the End of Time’ and specifically celebrates the only Jewish member of the quartet of players who famously premiered the work in a wartime prison camp, clarinettist Henri Akoka. David Krakauer’s Akoka is a six-minute, improvised prelude to the quartet, raucous and klezmer-inspired, and leads without a pause into the Messiaen’s first movement. At the other end is a piece of electro-acoustic music by the pretentiously named Socalled (aka Josh Dolgin) that begins interestingly enough with a montage of sound images of ticking time (emerging from the piano’s final strums in the Messiaen) and wartime broadcasts, but soon degenerates into an unpleasant melange of drumkit and rap against recorded fragments of the Quatuor (though maybe unpleasantness per se is not out of place given the circumstances it’s trying to evoke).

The performance of the Messiaen itself has a refreshing, slightly rough edge (it was recorded live, as long ago as 2008), with expressive, soaring phrasing from the two string players in the pair of ‘Louange’ movements, and energy and rhythmic élan in the faster movements. Krakauer’s clarinet, seemingly given a resonant boost in his solo ‘Abîme des oiseaux’, has a bit of a sour vibrato, however. The disc is attractively recorded, allowing for the perceived acoustic variances of the repertoire.