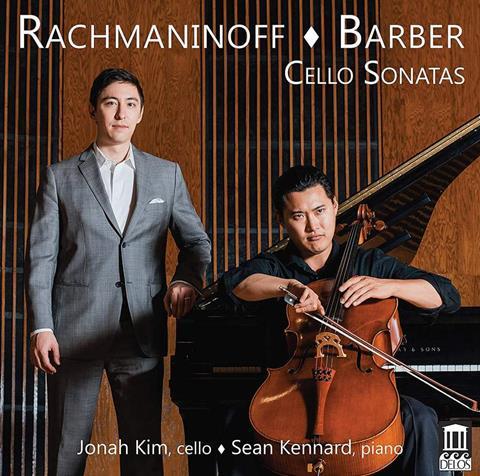 Kim and Kennard met as teenagers at Philadelphia’s Curtis Institute of Music, and had the privilege of being coached in Barber’s Cello Sonata by Orlando Cole, who gave its first performance in 1933, and was described by Barber as ‘the physician at its birth’. With Barber having studied at Curtis himself and Rachmaninoff often having stayed next door to the institute, this made the programme for the duo’s first CD together an easy choice.

The Curtis pair give a moving and musically satisfying performance of the Rachmaninoff. Kim’s full-bodied, rounded cello sound is ideal for the work’s Romantic lyricism and the energy and passion of his playing carry the listener along with them. The Scherzo is a touch on the steady side, but this allows for very well-defined triplets and pizzicatos.

Kim gives plenty of space to the broad phrases of the Barber. The Presto scherzo section in the middle of the slow movement, Brahmsian in its cross-rhythms, is beautifully light, with crisp low-tessitura spiccato. His wide vibrato, mostly well suited to this repertoire, becomes a little too audible near the end of this movement.

The recorded sound, while warm, is not well defined, and there are in fact times of intense keyboard activity when the cello is in danger of being swamped.