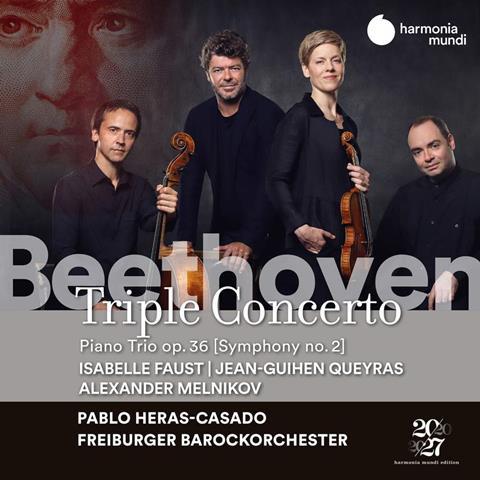 The big, muscular sound of the period instruments in the opening tutti of Beethoven’s ‘Triple’ Concerto sets the tone for this performance. The solo string players shape their melodies with beautiful eloquent playing, with Isabelle Faust ringing splendidly in the upper register and Jean-Guihen Queyras mellow underneath. In the passagework the three of them have rhythmic precision and a certain swagger, which they sometimes need to hold their own against the orchestra.

Queyras and Faust perform the opening melody of the Largo with finesse, and at the end of their lyrical account Queyras’s acceleration on the G leads straight into the finale (notable only because others, unaccountably, don’t, stopping dead at the double bar just where Beethoven marks attacca). There are touches of humour in this movement, and boastfulness in the A minor episode, with a delightfully nimble final Allegro before the barnstorming finish. The orchestra under Pablo Heras-Casado is on splendid form.

Ironically, without an orchestra, but now playing an orchestral work, the three players really show their class as chamber music players in an arrangement of Beethoven’s Second Symphony, with much vigour and high spirits. The recorded sound is close with a touch of resonance, and burnished in the concerto.