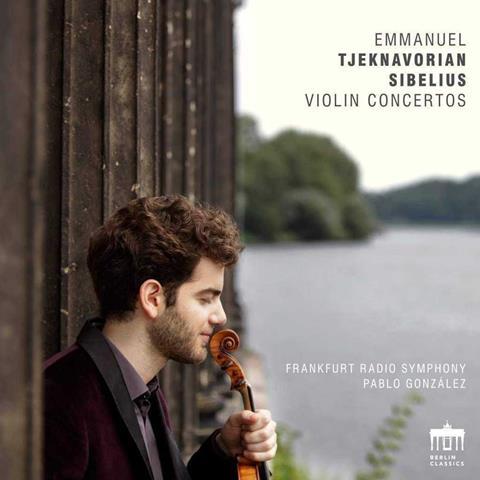 Description: Violinist plays his father’s concerto, a valuable addition to the repertoire

Emmanuel Tjeknavorian won the prize for the best interpretation of Sibelius’s Concerto at the 2015 Sibelius Competition and the reasons why emerge slowly but surely on the reading captured here. This is a performance with notable tenacity, well-plotted and clean in tone, particularly at the lower end of Tjeknavorian’s (unnamed) instrument, which has a rich, woody quality and no extraneous rattling or buzzing. I would be happy to hear it live, but what this fine young player’s interpretation lacks in a crowded recorded field is sheer power and command (particularly in higher registers), that last degree of cumulative strain and, from the orchestra, more fire to counter all the ice.

Of more interest here is the work rightly positioned first: the appealing, direct, bushy-tailed concerto for violin and strings from 1956 by the violinist’s father Loris. The concerto tumbles open with an eye-widening gesture and what follows is perhaps a touch more conservative and compartmentalised than that gesture would have suggested. It’s a fun, occasionally bold piece ‘in the folk style’, obviously influenced by Khachaturian’s Concerto in both its drive and its spiced lyricism derived from Armenian folk music, and it suits the soloist’s playing well (not unlike Sibelius’s in its use of sequencing and passagework). This is a score well worth taking up as a companion piece to mid-20th-century string orchestra works from Eastern Europe already in the repertoire. The sound here, in a Frankfurt studio, is brighter than in the live-recorded Sibelius, where the orchestra can seem a touch recessed and flattened.