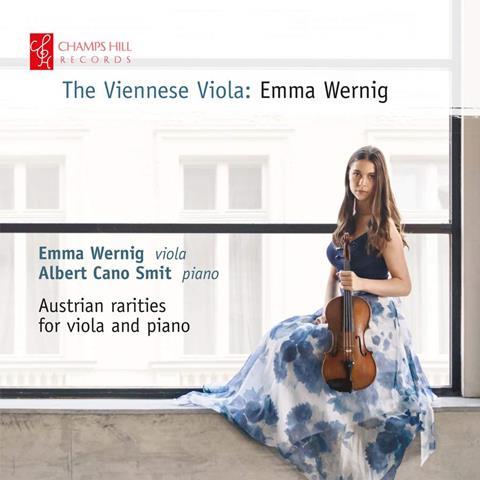 This album, recorded in the welcoming acoustic of the Music Room, Champs Hill, is part of the first prize that Emma Wernig was awarded at the 2017 Cecil Aronowitz International Viola Competition. The Austrian–German musician introduces a trio of little-recorded pieces by Viennese composers (by training if not by birth), Robert Fuchs and Hans Gál, with Schubert songs as the mellifluous encores.

When listening to Fuchs’s lovely Six Fantasy Pieces, it’s hard not to think of the compliment Johannes Brahms paid to his younger colleague: ‘Everything is so fine, so skilful, so charmingly created! One is always pleased!’ One is indeed, particularly when each three-minute miniature is as beautifully shaped as they are here by Wernig in close collaboration with her piano partner, Albert Cano Smit: their readings ooze that uniquely, untranslatably Austrian quality, Gemütlichkeit.

Hans Gál’s sonata was written in 1941 after the composer, forced to leave his home country when the Nazis came to power, had found a safe haven in Edinburgh. Understandably the music looks back wistfully to a lost world, speaking much the same language as Fuchs. Wernig is completely at home in this suggestively romantic sound world, consistently finding subtle variations of sound quality, vibrato and articulation. Her vivid musical imagination makes this listener look forward to further acquaintance with this highly promising artist.