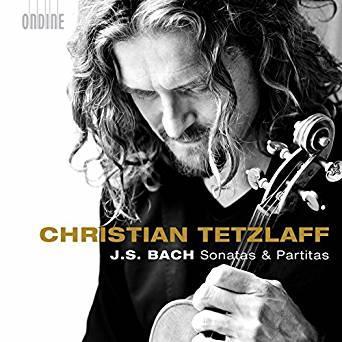 The process behind Christian Tetzlaff’s third recording of Bach’s Sonatas and Partitas comprised two live performances on consecutive evenings, patched by surrounding daytime sessions (see article in the June 2017 issue). For him, an audience is all-important for communicating his interpretations, which are clearly thought through and flexibly delivered. Melody is paramount, even in the Sonatas’ fugues, the architecture and voice-leading of which are relayed with varied articulations and with harmonic implications dictating emphasis. He marries his modern equipment with a Baroque appreciation of rhetoric and phrasing, and an expressive approach that is wide-ranging in dynamic. He is also alert to the idiomatic nuances of the Partitas’ dances.

Tetzlaff’s performances are ruminative and intensely lyrical in, for example, the sarabandes of BWV1002 and 1004, BWV1003’s Andante and BWV1005’s Adagio and Largo. They are made to seem spontaneous, courtesy of a pervasive rubato and a relaxed and varied approach to realising multiple-stopping, notably in the quasi-improvisatory opening movements of the first two Sonatas and in BWV1004’s free-flowing Ciaccona. Vibrato is employed only selectively. The recording is exemplary.

Not everything is entirely hunky-dory, however. BWV1001’s Presto finale and the Double of BWV1002’s Corrente, played with short, off-string strokes, are too fast for their detail to register fully, and moto perpetuo movements such as BWV1004’s Giga, BWV1005’s Allegro assai and BWV1006’s Preludio have a powerful sense of abandon when a more controlled approach may well have been more effective. Ornamentation is introduced sparingly in some repeated sections but could have been explored more copiously for expressive purposes.