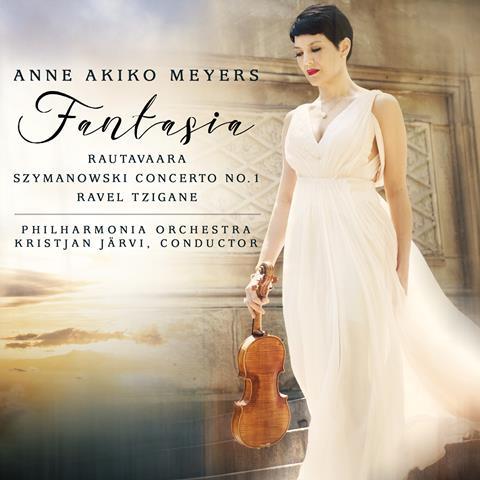 As little as a decade ago, the First Violin Concerto by Szymanowski sat on the outer fringes of the mainstream repertoire, yet such is the music’s hypnotic power and intoxicating aroma it has become a firm favourite. Tasmin Little’s outstanding coupling of both Szymanowski concertos with the BBC Symphony and Edward Gardner (reviewed in the last issue) captured the music’s raw emotional power and pungent orchestral opulence, and hot on its heels comes Anne Akiko Meyers, supported to the hilt by the Philharmonia Orchestra and Kristjan Järvi. If Little might be said to bring the music firmly into line with the Romantic rhetoric of Bruch, Lalo and Tchaikovsky, Meyers is more responsive to its Scriabinesque, hothouse exoticism, pointing the way forward to the bracing, visionary soundscapes of the atonal world. Accordingly, the recording envelops the players in numerous washes of hedonistic opulence.

Meyers also seduces the senses in Ravel’s Tzigane, emphasising the magical essence of its blazing inspiration without the slightest whiff of empty, showpiece bravado. Yet the star item here is Rautavaara’s Fantasia (2015), one of his last works and composed especially for Meyers, who soars aloft with its tender cantabile, shaping its shimmering melodic lines with a profound sensitivity that exerts irresistible pressure on the tear ducts.