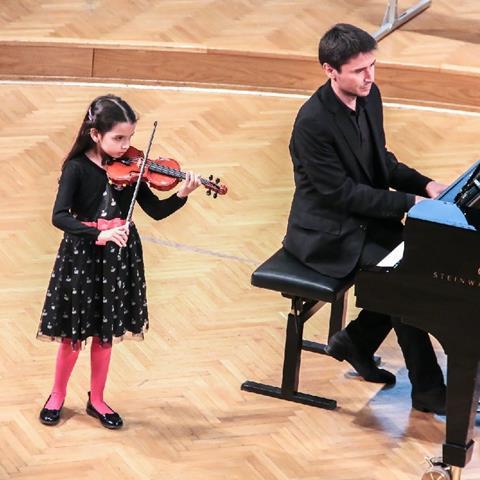 Even blizzards and thunderstorms – hard though they tried – could not keep audiences at bay at the European String Teachers Association (ESTA) conference in Ljubljana, Slovenia, this April. The proceedings began in the courtyard of the city’s old town hall, where ESTA members gathered around a line of violin-wielding men and women wearing historical court dress; familiar faces lurked in the crowd, including those of violinist Michael Bochmann and violist Bruno Giuranna.

From the outset, the focus was on celebrating Slovenia’s musical culture – particularly Piran-born Giuseppe Tartini (1692–1770), whose name and music featured in talks and concerts throughout the five-day conference. After initial welcome speeches, teenage students of the local Tartini Music Studio gave a short performance dedicated to their namesake, before all were treated to a display of images displayed over a light box dressed to look like a miniature theatre. A pink and green Lucifer, Tartini in a nightcap and a Slovenian narrator enthralled children and adults alike, as the tale behind the famous  ‘Devil’s Trill’ Sonata unfurled.

In contrast to the American String Teachers Association (ASTA) conference in Tampa, Florida, in March, this was a relatively small affair: rather than having tens of lectures to choose from every hour, in an enormous conference centre, here there tended to be only one or two. The venues were steeped in history and culture. One was Ljubljana’s Kazina Hall, a neoclassical building fitted with chandeliers, columns and well-worn rugs, and home to numerous intellectual, cultural and political events since it was built in the 1830s. Another, on the opposite side of Congress Square, was the Marjan Kozina Hall of the Slovenian Philharmonic, with murals and motifs adorning the walls and ceiling. To reach lectures in either involved walking along the Ljubljanica River, with its many pretty bridges, and passing by numerous grand buildings rife with columns and arches, in sunshine, snow and rain. Ljubljana Castle, towering on a hill high above the city, served as another reminder of the capital’s rich past.

Of particular interest were several lectures and a roundtable discussion that focused on folk music, improvisation and education. German jazz violinist Max Grosch gave tips to teachers wishing to help classical students (and themselves) to experiment with improvisation, beginning with simple exercises focusing on rhythm and tonal exploration. British folk violinist Chris Haigh gave his audience a tour of various folk traditions of Europe, incorporating both words and engaging snippets of violin playing. He spoke about the regional folk traditions of France, playing waltz-like melodies in bizarre time signatures, as well as discussing topics including the origins of the Irish folk-music pub culture, which apparently started in 1940s London and only infiltrated the drinking taverns of Ireland in the 1960s and 1970s. Later in Haigh’s session, many of the violinists present took out their instruments and played along with him en masse, using sheet music handed out for the purpose. Bows sailed in all directions and a variety of notes struck the air as Haigh described various folk techniques and everyone tried to keep up. All appeared to be having a tremendous amount of fun. Finally, German violinist Agnes Stein von Kamienski ran a workshop looking at how to use hand puppets and other props to encourage children to improvise sounds and phrases in different characters in lessons, both to aid mastery of the instrument and to make learning as engaging as possible.

Puppets also made an appearance during a talk discussing the Slovenian education system, which was largely overhauled after the country’s independence from Yugoslavia in 1991. To begin, we were given facts and figures about string teaching and students in Slovenia. Then a heart-warming performance by students from the Tartini Music Studio began (pictured), integrated into a puppet show narrated by violin teacher Vildana Repse and her colleagues. Between each segment of a fairy tale about a boy in love with a princess, a new immaculately dressed child emerged from behind the curtain to play a piece from memory. Youngsters around the age of ten began by playing sweet, simple melodies, but over the course of the next 40 minutes or so, the fairy tale came to an end and some talented older pupils were brought to the fore. Violinists Sofya-Agnessa Yakuntsova and Magdalena RadovanoviÄ‡ impressed with a movement of Wieniawski’s Polonaise Brillante and Lalo’s Symphonie espagnole respectively. In fact, the Tartini Music Studio students gave some of the best performances of the week, even when compared with some of their older counterparts who gave recitals. (The calibre of some of the professional concerts was for me the only disappointing aspect of the conference.)

Networking drinks events helped to bring everyone at the conference together at the end of each day; a drinks party held by the conference sponsor, Thomastik-Infeld Vienna, included a fun performance of jazz numbers including Birdland, by a string quartet led by violinist and singer Bernie Mallinger. In the day time, upstairs in the Philharmonic Hall, exhibitors displayed strings, books, bows, instruments and more; a friendly background buzz filled the room as string teachers explored the stands and chatted to their owners – particularly around lunchtime, when a central table was loaded with soft drinks and Slovenian pastries.

Every year the ESTA conference is held in a different European city: past hosts have included the UK, Sweden, Croatia and Italy; next year it will be Russia. Taking part is an incredible way both to experience a new culture and to be inspired by the string-teaching practices of communities very different from our own. It is a wonderful opportunity for string teachers and manufacturers to come together, learn from one another and share their enthusiasm for music.

Read: Guidance for music teachers - how to deal with difficult parents