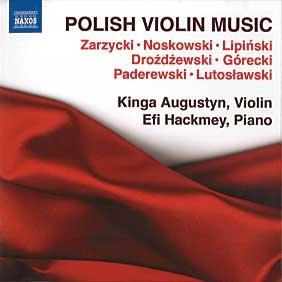 Five of these short works here receive world-premiere recordings. Aleksander Zarzycki’s G major Mazurka of 1884 has had a past life as an encore piece, while his other works here, the Romance apart, are new on disc. Kinga Augustyn treats both mazurkas with charm and a certain coquettishness, relishing the melodic twists and turns and extrovert technical displays. In the Introduction and Cracovienne and the Andante–Polonaise she keeps a light touch in the energetic fast sections, dancing and laced with virtuosic flourishes. There is plenty of character to his Romance, and to Zygmunt Noskowski’s Chanson ancienne.

Augustyn leaps forward a century for two solo caprices by Piotr Drozdzewski’s, both emotionally as well as technically probing. She plays Górecki’s miniature Sonatina in one movement with driving intensity, before opening out into the more spacious Variazioni, in a performance embracing beautifully shaped, pensive melodic lines and darker, biting playing. Górecki’s Little Fantasia is, at nearly twelve minutes, the longest work on the CD. Augustyn draws together its slowly evolving repetitive segments with ease and assurance.

She shows great sensitivity in miniatures by Paderewski and Lutoslawski before returning to the 19th century for the unashamed virtuosity of Lipinski’s Two Impromptus, played with verve and superb control. The recording is clear and warm.