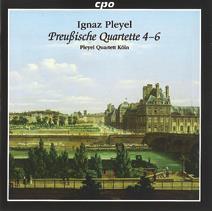 These seldom-heard works form the ‘deuxième livre’ (nos.4–6) of Pleyel’s twelve ‘Prussian’ quartets, dedicated to Frederick William II of Prussia. The Pleyel Quartet presents a largely persuasive view of them, giving alert and intelligent readings of elegance and charm. Although the players’ intonation is occasionally questionable and their performances sometimes seem a little too comfortable and bland, the finely blended tone of their gut strings, their characteristic nuanced vibrato and their fine ensemble are thoroughly commendable.

The musical weight of all three quartets lies in their spirited first movements, in which violinist Ingeborg Scheerer negotiates her leading melodic and virtuoso role with dazzling panache. She and her colleagues are also highly expressive in the central slow movements – contemplative and introspective in the minor-mode Adagio of B334 and lyrical and tender in the muted E major Romance of B335. Like the composer they are championing, they make dramatic use of silence and they effectively convey Pleyel’s humorous touches in the rondo finales.

Most amusing of all is that of the two-movement B336: it comprises five well-characterised variations, including one featuring cellist Nicholas Selo in sparkling form, and a final Presto whose Haydnesque ‘joke’ is successfully captured. The recorded sound is well balanced, natural and detailed.