The human touch: Postcard from Sendai

No first prize was awarded in the violin section of this year’s Sendai International Music Competition, yet the Japanese contest showcased some sensitive and interesting performances, writes Chloe Cutts 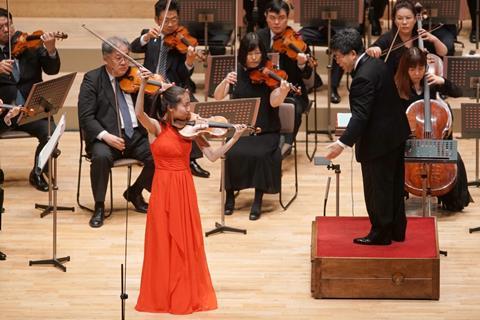 At a press conference following the prize-giving ceremony for the violin section of the seventh triennial Sendai International Music Competition (SIMC) in June, a reporter asked the six finalists each to describe their experience performing at this singularly demanding and unusual competition.

The SIMC launched in 2001 around the city’s philharmonic orchestra, and in a twist on convention its organisers made concertos the main focus. Whereas music competitions typically culminate in a concerto performance, the SIMC asks candidates to play one or two at each stage. In this edition, the repertoire spanned from Bach in the preliminary round (either the A minor or the E major Concerto) to the 20th century in the semi-finals (Stravinsky’s Violin Concerto, Prokofiev’s no.1 or Bartók’s no.2), and finished with one of Mozart’s five violin concertos and a Romantic concerto, chosen from lists. For good measure, candidates also performed an Ysaÿe violin sonata (no.3, no.5 or no.6) in the preliminaries, and at the instigation of jury member Gidon Kremer there was a new concertmaster section in the semi-finals in which candidates played the violin solo from Brahms’s Symphony no.1, second movement, and the ‘Das Tanzlied’ waltz from Strauss’s Also sprach Zarathustra.

What transpired from the interviews with the finalists was that the learning curve at this competition had been very steep, and the experience enormously instructive. As jury chairperson Yuzuko Horigome acknowledged, to prepare so much diverse repertoire and perform it within two weeks is an exceptionally taxing assignment, one that goes beyond what a professional concert artist would normally undertake. Added to this, only two of the finalists had prior experience performing as soloist with a professional orchestra or of competing at such a high level. One who had done both was second prize winner Shannon Lee, who arrived fresh from being placed fourth at the Queen Elisabeth Competition where she had performed two of the works she would play here: Mozart’s Violin Concerto in D major K218 and the Tchaikovsky.

The pressures and specific requirements of competitions can make performances on such occasions feel more like a demonstration than an interpretation, but there was not a trace of artifice or show in the playing of Lee. In the semi-finals, she proved a supple and intelligent guide to Bartók’s Second Violin Concerto, responding to the score’s tempestuous changeability and complex structures (variations within variations) with assiduous sensitivity, and finding an ideal burnished, sonorous tone with which to describe the work’s folk-infused dialogic elements. The natural flexibility of her phrasing and timbre also brought vitality to her reading of Tchaikovsky’s Violin Concerto in the final, and there was an underlying sense in both these performances, especially during the slower, more ruminative sections, of a player discovering the score anew – something that would certainly have been the case with the Bartók, which she was performing with an orchestra for the first time.

There were other notable performances in the semi-finals, the most successful of the competition’s stages. In Prokofiev’s Violin Concerto no.1, Mayu Tomotaki, placed third, created a compelling narrative from the score’s split personality – the wistful Romanticism of the beginning which soon enters a more caustic modernist vein. The brilliant finale, with its roughshod dance inflections and celestial ending, could hardly be more of a shape-shifter, and throughout Tomotaki articulated the virtuosic brilliance of the writing with even-handed control. In the same work, Arai Rio, placed joint sixth (with Donghwi Ko), quite beguiled in the ethereal, dreamlike passages, her slender, silvery tone capturing beautifully what Joseph Szigeti called the ‘fairytale naivety’ of the languid opening melody and the shimmering, fine-spun textures in the outer movements. Earlier in the same concert, Ko had turned out an animated, charged and individual account of the Bartók that occasionally walked a perilous tightrope between description and expression.

In the final round, fourth prize winner Chihiro Kitada’s fresh, sinewy account of Mendelssohn’s Violin Concerto in E minor persuaded in part because she infused it with so much spirit and joy. Here was a player clearly loving the experience, and the shouts of approval from audience members at the end indicated that her enjoyment had been thoroughly shared. Everywhere there was beauty and serenity – the loveliness of the first movement’s second subject bloomed warmly, and she phrased the keening slow-movement melody so that it spoke longingly; but Kitada could also turn on a sixpence to deliver with bracing alacrity the box-of-tricks cadenza and effervescent finale, which fairly danced.

In the Tchaikovsky, fifth-placed Elias David Moncado recovered impressively from losing his shoulder rest seconds before the first-movement cadenza (can there have been a more terrifying place for this to have happened?) to complete the solo and the movement in good style. If anything, the loss improved his performance by slowing him down a little, so that the music was more clearly articulated, and all the more compelling for that. Moncado is a warmly communicative and sympathetic player, the youngest candidate (born in 2000); and there was much to enjoy in his truth-seeking and heart-on-sleeve account.

Who among the finalists possessed the drive to become a soloist? This question had been posed at a press conference for journalists, where several of the reporters had also asked why, for the first time since the competition launched, no first prize had been awarded. This is nothing unusual, since competition jurors have a duty to maintain a certain level of criteria for each prize band, and several reasons were cited, including the lack of professional performance experience and the fact that other major violin competitions attracting very high-calibre candidates were going on at the same time.

Another factor lay with the Mozart concertos, which often lacked the energy and investment devoted to the 19th- and 20th-century composers. As Horigome stated, Classical repertoire is always difficult, not technically but in terms of how to express the music. The candidates had tended to use the same approach as each other, producing a sound that was beautiful but not always descriptive. ‘To play Mozart well you have to know the background – the symphonies and operas. You have to make a story, and to do that you have to research on your own, and imagine,’ she told me in a private interview. She pointed to Lee’s account of K218 – specifically the third-movement Andante grazioso, which ebbed and flowed with nuanced phrasing and sound – as the one performance that had worked for her.

More successful was the concertmaster section, which the competition’s organisers had introduced as a test of the candidates’ ability to direct, listen and think as part of an orchestra. The difference each violinist made to the sound of the Sendai Philharmonic Orchestra was startling; and credit to the orchestra’s players and conductor, who had prepared and performed some 19 pieces for the event.

The Sendai PO became a symbol of hope and healing following the devastating Japanese earthquake of 2011, which killed thousands and personally affected many on the competition’s staff. In the aftermath, the city council continued to commit money to the event, and a culture of support and affection towards the contest has prevailed among the city’s inhabitants ever since. ‘The arts are one of the things that can help the healing process,’ said Horigome. ‘Music was not written for shouting; it was written for the weakness of humans – that’s why it touches.’ Being able to convey this sentiment with complete authenticity was the most elusive element the jurors had been looking for over the past two weeks, and it came across most convincingly in the performances of Shannon Lee.