The Girls in the Magnesium Dress: Expanding repertoire for double bass and harp duo 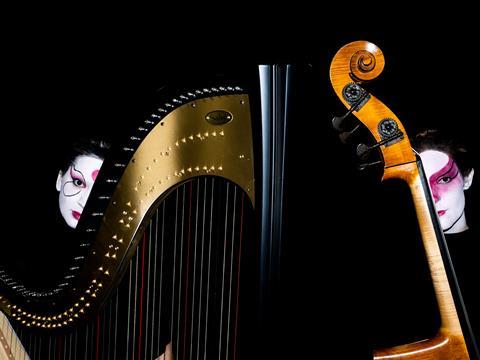 My musical path started with piano tuition, but I switched to double bass at the age of 20. Step-by-step, I explored and enriched the double bass repertoire to find my identity not only as an instrumentalist, but as a musician and artist . Since 2018, I have worked with Anna Astesano, virtuoso harpist and duo partner as The Girls in the Magnesium Dress (named after a Frank Zappa’s piece), to develop our performance approach and spread new repertoire to reach equality between musical instruments, as unfortunately some are still considered ’second division’. Musical instruments are extension of our body, and we choose the ones we feel are more suitable to express our ideas; all musicians should be considered for the content they produce and not judged for the instrument they play.

In April 2022 we embarked on creating an album with new repertoire that explores deep connections between mutual influences of Japanese art and Western culture through double bass and harp chamber duo.

During the first lockdown, Anna and I gathered all the music we have produced for the duo and concluded that the album was needed, serving both as a repertoire landmark for double bass and harp duo, and a springboard to popularise this special ensemble. Anna’s contribution to Ruutsu’s composition/arrangement process was crucial; without her I could not shape, tailor, and imagine so accurately any of these pieces. This testifies how important it is to have a tight relationship between composer and performer.

Ruutsu (ルーツ, in Japanese katakana alphabet) means ’Roots’ and explores the mutual fascination between Japanese and Western arts and culture; a reboot of Japanese art and design fascination that takes shape with the new sonorities of harp and double bass duo. The idea for this debut recording came from a piece that Yoshihisa Hirano (composer and orchestrator of some of the most famous video games and anime soundtracks, such as Final Fantasy and Death Note) composed for our duo. He wrote, in close collaboration with us, a wildly elegant elegy that fully explores the duo’s sound palette, in an attempt to throw the listeners in a flashy modern Japan. To characterise the visual component of this synesthetic journey, our album cover depicts our faces half painted as traditional masks, showing our own western roots looking with respect and admiration at Japanese culture and arts.

Read: ‘The violin has been the conduit that has expanded my thinking about music’: Michael Torke

The cover is a tribute to Kabuki theatre, the once ancient female art that later developed into its present all-male theatrical form after women were banned from performing Kabuki in 1629. We felt a strong connection with this ancient art form, not only as female artists, but also for the theatrical aesthetics we adopt for music performance.

Among the composers we have explored are Maurice Ravel, Camille Saint-Saëns and Giacomo Puccini, who harnessed the late 19th-century wave of japonisme, capturing its deepest essence and passing on to us wonderfully malleable repertoire to transcribe and shape for our duo.

Composer Stefano Teani and I have revisited modern japonisme through synesthetic impressions of martial arts, paintings, and poetry from the most rural Nipponese traditions up to modern anime and manga culture. Michio Miyagi and Yoshihisa Hirano, who both studied in western countries, masterfully portrayed Japanese arts and musical culture respectively at the turn of 19th and 20th centuries.

A piece of music is well arranged or transcribed when such process of translation does not betray the character nor hinder the musical intentions of the original source. Personally, I consider arranging and transcribing vital to explore and shape new ensemble techniques and repertoire, as well as to boost the identity of instruments.

A perfect example is the opening piece of Ruutsu, Haru No Umi (The Spring Sea) by Michio Miyagi: Anna’s nail pizzicato, inspired by the sound of Koto, melts with double bass sul ponticello harmonics, evoking the light and nostalgic sound of the Shakuhachi (traditional Japanese flute).

The transcription doesn’t merely imitate the two traditional instruments, but it aims at faithfully conveying the atmosphere of Miyagi’s piece while highlighting the sound palette of harp and double bass both as an ensemble and as individual instruments.

By putting music first, we can go beyond the illusory technical limits of the instrument and truly emancipate it. After all, as Frank Zappa used to say, ’Without deviation from the norm, progress is not possible.’

Ruutsu is sponsored by Carne Trust and Salvi Harps. It has enjoyed debuts in venues and festivals such as Teatro La Fenice in Venice and Zappanale Festival in Germany. On 18 October 6:30pm, Ruutsu will have its London launch at the Blackheath Halls in collaboration with Trinity Laban Conservatoire of Music and Dance.

Read: From page to performance, with the help of the composer