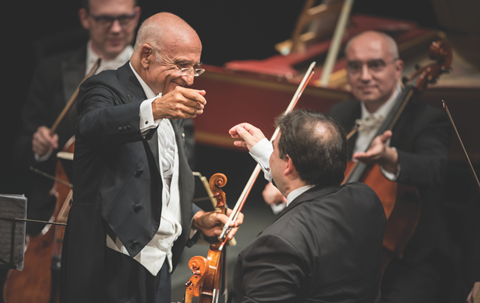 On a concert tour of Japan in the mid- 1970s, I had to give 25 performances of Beethoven’s Violin Concerto in 28 days. What I remember most about that experience is that every time I went on stage, it was as if I was playing it for the first time. This is the quality of a genuine masterpiece: it always feels fresh, each rendition feels like a new interpretation, and you can always find something different to say. It’s what I call the miracle of great music, and there are very few works in the violin repertoire that can be called that.

I also think it’s the most difficult concerto in the literature. I first heard it in 1954 when I was 13; my father brought home a 78rpm recording – which meant we had to turn it over every five minutes – and it was Gioconda de Vito performing in Salzburg under Wilhelm Furtwängler, both huge musical talents. She’s still among my favourite soloists of all time, and I was lucky enough to meet her six years later. When we talked about the concerto, she said what I had always thought: the first page is so incredibly simple that it becomes difficult in its simplicity.

Beginning with the octaves and then going into the fantasy on the D major scale, to capture the beauty of the music seems to be so easy, but it never is. De Vito agreed wholeheartedly, and so did David Oistrakh when I joined him on his tours of Italy in the early 1960s, when I’d play for him. I had a great relationship with Isaac Stern, too, and he told me how the thought of that first page would absolutely terrify him, every time he went on stage to play it. Each of these great soloists would tell me how hard they found the concerto, all down to capturing that feeling of simplicity.

What you should always remember is to pay attention to what’s printed in the score. After I heard the Salzburg recording I went out to buy the score, but the only one available at the time was the Joachim edition. I had no idea it had been altered so radically from what Beethoven wrote, from the colours to the points of articulation. When the urtext edition finally came out, I had to relearn the whole thing. After that it all made sense to me.

I’ve recorded the piece three times. The first was in 1978, with the Leipzig Gewandhaus Orchestra under Kurt Masur. The phrasing of the orchestra was beautiful, especially the wind instruments, and the players had a keen enthusiasm for Beethoven’s works. The second was in 1994 with Carlo Maria Giulini conducting the La Scala Philharmonic. That was an extraordinary experience: at the first rehearsal in the opera house, I watched Giulini during the opening tutti and I suddenly had the overpowering feeling that I was watching Beethoven himself conduct!

Giulini seemed to inhabit the music so wholeheartedly that my impression was that here was the way the composer would have wanted it. It’s important for conductors to remember that they’re at the service of the music, not the other way around, and Giulini embodied that spirit exactly the way I imagined.

The third recording was released in 2015 and featured the Orchestra da Camera Italiana, which I put together in 1996. It was a great experience and I enjoy performing without a conductor from time to time; I’ve also played it like that with the Chamber Orchestra of Europe. Having said that, every conductor with whom I’ve performed the concerto has given me something new and allowed me to develop my understanding of the work – and it’s important to remember that there is no such thing as a ‘perfect’ interpretation, as the moment you think you’ve attained it, it means you have nothing to say any more!