How do you create a recital programme around Paganini? Violinist Mathilde Milwidsky and Robert Taub share their inspirations ahead of a performance at Plymouth’s Levinsky Hall 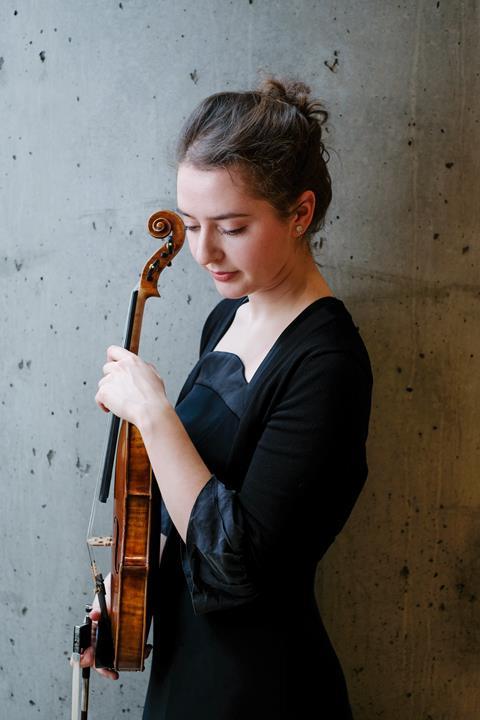 I’ve known for a long time that I wanted to perform a large slice of Huw Watkins’ output for violin in concert. When Robert Taub (director of the Arts Institute at Plymouth University) gave me the freedom to programme a recital for the inaugural season of the newly-renovated Levinsky Hall, I knew that this would be the moment. Robert’s one wish was that I might include Paganini’s Caprice No. 24, and programming from this starting point was definitely a first for me, having only performed Paganini during the first rounds at competitions and at ‘Klassenvorspiel’ during my studies in Munich.

Huw’s Partita for Solo Violin immediately came to mind. It was written in 2006 as a commission for the BBC New Generation Artists Scheme and the incredible Alina Ibragimova. Huw’s melodic writing is a wonder - phrases of searing beauty that work with the resonance of the instrument to fully allow the violin to ‘sing’. His writing fits ‘under the hand’ to such an extent that it’s a little surprising that Huw doesn’t play a string instrument himself. The piece, in four movements, varies between the finest filigree writing, full of exquisite nuances of rhythmic variation and shading, to an astonishing, growling final movement that somehow transforms the instrument into another entity, something untamed and irrepressible. The virtuosity of this final movement, and even the extended techniques within some of the other movements, are never the focal point but always at the service of the music.

By contrast, Paganini’s 24th Caprice takes the violinist through a whole gamut of advanced techniques - left hand pizzicato, runs of thirds, tenths and arpeggios - with each variation highlighting a specific technique. One slightly histrionic variation is entirely in octaves - my teacher recently quipped that one could imagine someone singing it while crying out of one eye. I think, and hope, that it will be fascinating to hear these two remarkable works side by side, which plumb the depths and heights of the unaccompanied violin.

As Huw will be joining me for this concert, I wanted to include two pieces of his for violin and piano, one of which, ‘Arietta’, was composed during the 2020 lockdown Playing Huw’s own works with him is incredibly special - the notes are utterly part of him, and this opens up dimensions in performance that one dreams of.

Elgar’s Sonata for Violin and Piano in E minor, written at the close of World War One, is a piece that is near to my heart. Elgar himself wrote in a letter to its dedicatee, Marie Joshua, that it is ’full of golden sounds’. The second movement contains writing that is special and elusive, almost stream-of-consciousness. Elgar’s wife suggested that it seemed to evoke the magical nature of the Sussex woods surrounding their country house - ‘Brinkwells’. I’ve experienced a little of this magic, I think, having spent much time as a child with my family in the Sussex countryside.

As a foil for the Watkins and Paganini, I decided to bookend the programme with Bartòk’s Romanian Folk Dances, arranged for violin and piano by his friend and compatriot Zoltán Székely, and Maurice Ravel’s Tzigane, dedicated to the great Hungarian violinist Jelly d’Arányi.

These works feel earthbound in the best sense - rooted in folk tradition, vocal inflections and Central European rhythms - and they provide a little virtuosic continuity for Paganini’s 24th Caprice.

’Paganini Caprice no.24 has exerted a radience beyond its own immediate sphere’ - Robert Taub

Rumour had it that it was the Devil himself who had played a violin concert in Vienna on 29 March 1828, such was the effect of the theretofore unimagined playing of the violin virtuoso Niccolò Paganini. In addition to the fascination of the diabolical as a part of the burgeoning Romantic ethos, Paganini influenced the most serious composers of the time. His dazzling virtuosic innovations stimulated Chopin to seek an expansion of expressive colouration on the piano. He exerted not only a general compositional influence on the young Schumann; indeed, the intensely spiritual effect of his playing gave Schumann the strength to definitively abandon the law career wished for by his mother in favour of a career as a musician.

Although by the time Liszt heard Paganini in Paris in 1831 he had distinguished himself as an extraordinary pianist, the ever competitive Liszt established for himself the goal to set new standards for piano virtuosity. In addition to his own Transcendental Etudes, Liszt completed his Six Grandes Études de Paganini that include virtuoso piano arrangements of La Campanella (from the last movement of Paganini’s Violin Concerto no.2) and 5 Paganini Caprices. The Paganini Caprice no.24 has exerted a radiance beyond its own immediate sphere; not only is it the model for the sixth of Liszt’s Paganini Etudes, it also serves as the theme of Brahms’ Variations on a Theme of Paganini and Rachmaninoff’s Rhapsody on a Theme of Paganini.

Mathilde Milwidsky and Huw Watkins will perform this programme at the Levinsky Hall at 7:00PM on 12 November 2022. More information can be found here: https://www.plymouth.ac.uk/whats-on/autumn-2022-virtuoso-violin

Read: Pavel Šporcl: The man with the blue violin

Read: ‘Its brilliance overwhelmed me with emotion’ - Philippe Quint on Franck’s Violin Sonata