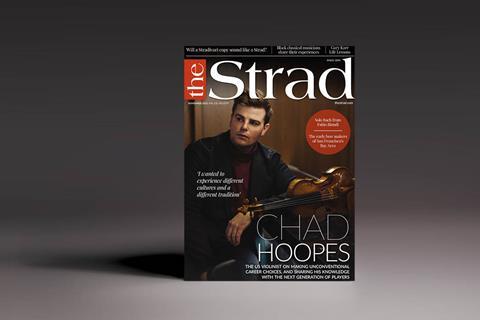 When Chad Hoopes won the Junior division of the 2008 Menuhin Competition aged 13, life as an international soloist may well have beckoned. Still only 27, the American violinist has certainly packed in an array of performances in the ensuing years, yet his career has been more varied and nuanced than one might expect – primarily due to decisions taken by Hoopes himself. Yes, there have been glittering concerto appearances aplenty, but also time taken to study in Europe, a long-standing association with the Chamber Music Society of Lincoln Center, and most recently a teaching position at the Meadows School of the Arts in Dallas – an opportunity to share his knowledge with a new generation of players. ‘As I get older, I see how so many things are connected in music and in art and culture,’ he tells Toby Deller on page 28, ‘and I’m constantly trying to learn more.’

Hoopes’ current instrument is a 1991 copy by Sam Zygmuntowicz of the 1740 ‘Ysaÿe’ Guarneri ‘del Gesù’, once owned by Isaac Stern – a violin with which Hoopes immediately fell in love due to its ‘ease and immediacy’. On page 42, Zygmuntowicz details an experiment comparing the sounds of three outstanding violins by Stradivari and ‘del Gesù’ with his own faithful copies. Is it possible to replicate the tone of a Cremonese masterpiece by duplicating its design? As always, the answer is more complicated than we might wish, but acoustic spectral analysis provides some very interesting results.

Also in this American-themed issue, Pauline Harding speaks to black US string players about their experiences of prejudice and under-representation in the classical music industry on page 34, while on page 50, Raphael Gold recounts the story of the bow makers of San Francisco’s Bay Area during the early 20th century. Plus, as concerts and festivals welcome the return of live audiences, turn to page 26 for a Postcard from the Sun Valley Music Festival in Idaho by Laurence Vittes.