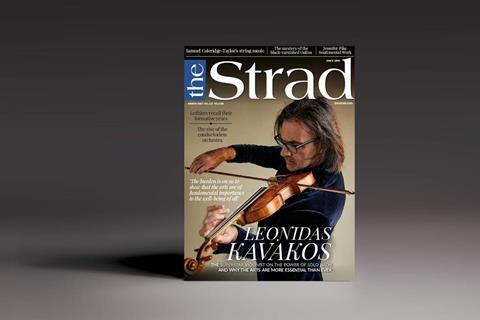 The road to Leonidas Kavakos’s first complete recording of Bach’s Solo Sonatas and Partitas has been a long one. This most thoughtful of violinists talks to Charlotte Smith on page 26 about how his journey was seeded by a revelation all the way back in 1989, when he heard a recording of these seminal works by Baroque violinist Sigiswald Kuijken, an experience Kavakos describes as ‘like an earthquake’. It took him until his early fifties to arrive at an interpretation that he was ready to share with the world both in his new recording and on a concert tour he is undertaking later this year. It also proves that even with such frequently recorded repertoire as Bach, the combination of great music and a great musician means there are always new perspectives to explore.

Another phenomenon that has in part been inspired by the period-performance movement is the rise of the conductorless orchestra. On page 34, Jacqueline Vanasse speaks to section leaders from the growing number of ensembles that have abandoned the largely 20th-century concept of orchestral musicians as a kind of collective instrument to be ‘played’ by the conductor. Instead, these ensembles are taking a far more democratic approach to music making, one that gets to the very heart of what it is to be a collaborative musician.

Collaboration is also central to becoming a successful luthier. On page 40, Peter Somerford explores the ‘journeyman years’ of several contemporary makers and restorers: that tricky but essential post-college period of training and apprenticeship. For the modern luthier who is just starting out, this means learning not only advanced practical techniques in the workshop, but also the ‘soft’ skills – such as networking, time management and dealing with customers – that are required to maintain a successful career. This toolbox of experience can make a good luthier into a great one.

Also in this issue:

Luigi Cavallini:  The violin makers of Tuscany have long been overlooked. Florian Leonhard examines the life and work of a 19th-century luthier based in the city of Arezzo

Coleridge-Taylor Violin and Chamber Music:  Tatjana Goldberg explores some of the British composer’s extensive output for strings, and reveals how US violinist Maud Powell played a part in his success

Violinist Jennifer Pike shares her love for Szymanowski’s Violin Sonata in D minor in this month’s Sentimental Work, while Diotima Quartet violist Franck Chevalier shares her memories and opinions in Life Lessons. Alexander Sitkovetsky shares how interpretations have changed in 15 years of his eponymous trio in this month’s Opinion,  plus a Postcard  reporting back from the 2021 Cambridge Music Festival.

We take an In Focus  look at a c.1870 viola by Niels Larsen Winther and My Space   features Swedish luthier Magnus Nedregård. Bow maker Eric Lane completes his method  for making a Parisian eye ring in Trade Secrets, while Michel Lorge examines the mystery of late 18th-century dark-varnished violins in Making Matters.