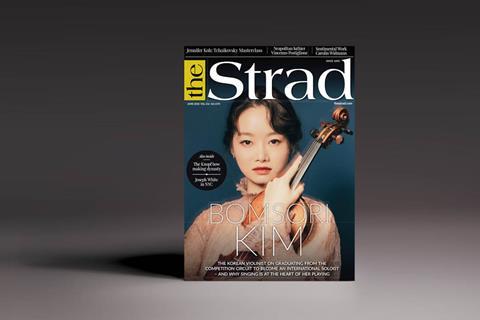 Instrumental contests are generally considered to be high-pressure environments. But for Bomsori Kim, who spent a good deal of her twenties touring the international competition circuit, life as a travelling soloist has the potential to throw up far greater stresses. Competitions provide a structure and hierarchy which allow audiences to understand to some degree what the contestants are going through – but when appearing in concert, says Kim, ‘you are there just once, and maybe you will never be invited back, so you have to give your best all the time – to everybody.’ The Korean violinist is most certainly becoming a top-flight soloist despite the pandemic. This past year has been one of her busiest yet, with multiple live and digital performances, and her first solo recording for Deutsche Grammophon. Yet keeping her grounded is a deep desire to communicate with her audience, and always to sing through her instrument – as she tells Andrew Mellor on page 24.

For the 12 Ensemble, competitions were never a viable path to professional success. Formed in 2012, the London-based string group has forged an unconventional route to recognition, collaborating with a broad range of artists from multiple genres. At the heart of the group’s ethos is creative control – from its conductorless performing model to a decade of self-promotion – and as founders Max Ruisi and Eloisa-Fleur Thom tell Toby Deller on page 50, this has enabled them to concentrate more fully on the repertoire.

For most musicians, a passion for their craft makes the challenges of an often-difficult profession worth the hard work and sacrifice. In the Knopf family of bow makers this dedication was the defining characteristic of more than a dozen accomplished artisans spanning 150 years. Apart from Christian Wilhelm, Heinrich and Henry, however, very little is known about the members of this important dynasty – an omission that Gennady Filimonov seeks to rectify on page 32.