With musical examples, Helen Brunner examines how Suzuki’s tonalisation exercises are used to create a beautiful sound on the violin. From the September 2021 issue

The following extract is from The Strad’s September 2021 issue  feature ‘The Suzuki approach to tone: Every tone has a living soul – Shinichi Suzuki’. To read it in full, click here  to subscribe and login. The September 2021 digital magazine  and print edition  are on sale now 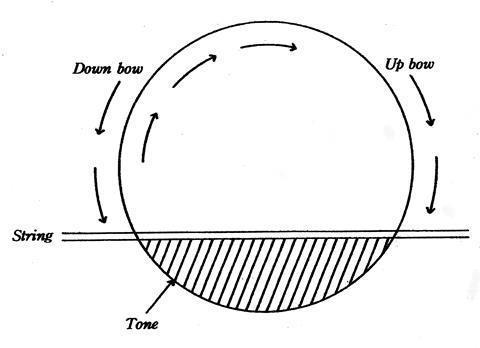 FIGURE 1 Circle training diagram, from private teacher handout ’Suzuki Method Report’, 1977. The weight of the elbow helps the bow to sink deeply into the string. The action is completed by the hand forming a circle in the air

Finding the centre of gravity in our own body was as important to Suzuki as breathing and playing. He was obsessed with the force of gravity, and wanted to know what happens to the sound of an instrument as you release more weight into the string. (Suzuki delighted in telling me that the best violin teacher in the world was from England: Isaac Newton, no less.) He explained it thus: put an apple on a shelf, high above your head. The hand leads, obviously. Enabled by gravity, bring the apple down again by allowing the big muscles in the back and shoulder to let go. The hand lifts the apple up, the elbow brings it down. This is the principle of string-crossing and will create good tone. The hand leads the bow over to the G string, the whole arm releases on the way back to the E. The same idea applies to down bows and up bows: when the middle of the bow is balanced on the string, the down-bow stroke occurs by letting gravity lead with the elbow. For an up bow, let the hand lead with the whole arm. This was how Suzuki began tonalisation training with his pupils – he called it ‘circle training’, the fundamental guideline to achieving good tone. The diagram in Figure 1 is a depiction of circle training, whereby the weight of the elbow allows the bow to sink deeply into the string. The action is completed by the hand forming a circle in the air. For both up and down bow, the first action is to keep the elbow free and relaxed. Whatever concerto you were working on, every individual lesson began with tonalisation, and everything was always memorised.

From the start, the ringing notes, even in the Twinkle, Twinkle, Little Star Variations  (the first and essential piece of the Suzuki repertoire), were extremely important (Figure 2). Suzuki was passionate about listening for the after tone – the sound that continues to ring like a temple bell after the bow has stopped. ‘I can see good tone,’ he often said. The vibrations of beautiful tone are indeed visible. When the bow hairs catch the string, you can see it vibrating. The bridge and soundpost also vibrate with the back of the violin, and the vibrations continue into the scroll until the whole instrument is alive, becoming a precious, vibrating, resonating box. And without tension, the whole human body also vibrates, reflecting the player’s life force beyond the realms of music.

FIGURE 2 Exercise from Suzuki Violin School   vol.1 to prepare for Twinkle, Twinkle. Little Star Variations.   The sound should continue to ring like a temple bell after the bow has stopped

The tonalisation exercise shown in Figure 3 was always a favourite. The fingers of the left hand have to find the exact point on the string when playing the stopped primary resonating notes E, A, D or G, in order to make the whole violin ring. This resonant spot is only the size of a pencil point. You are either in tune or not in tune. With perfect intonation, the sympathetic vibration catches the sound of the open string and new harmony is created. The listener effectively hears sublime double-stopping. Ultimately, every single note on the violin can pick up some resonance, and if you listen carefully enough you will even hear the resonance from the strings behind the bridge. 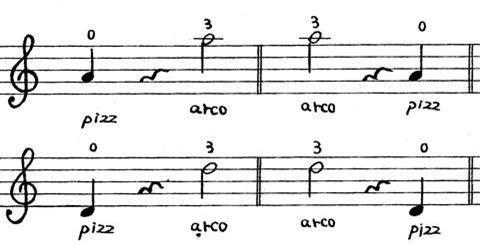 Watch the string appear to split in two when you play it open. The sympathetic string also vibrates when the octave is played. Listen to it ring. Take the humble open string pizzicato – train your ears to listen to the echo after the pluck. ‘Pizzicato does not lie,’ Suzuki said. Create the same tone colour with the bowed note (Figure 4).