‘He was a very gentle, introverted person, and you can hear that in his playing’ – Jerusalem Quartet on Bartók

The Jerusalem Quartet’s second instalment of Bartók string quartets brings a new delicacy and clarity to these works, which are so often portrayed as brutal. Violinist Alexander Pavlovsky and violist Ori Kam discuss their approach with Tom Stewart 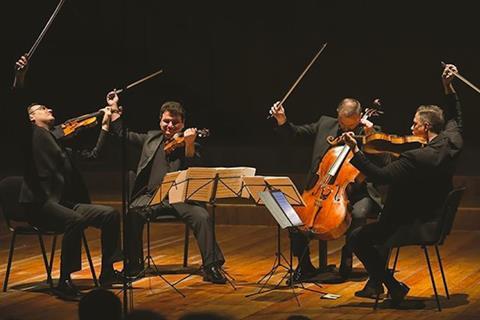 The following is an extract from our session report with the Jerusalam Quartet in The Strad’s September 2020 issue. To read in full, click here to subscribe and login. The September 2020 digital magazine and print edition are on sale now.

Jerusalem Quartet violist Ori Kam points to the scores themselves as evidence that Bartók didn’t conceive his music in a way that sought to confuse or confound the listener. ‘His notation is very easy to understand; he doesn’t hide what he means. It’s useful for us, of course, but translating simplicity on the page into sound is an enormous challenge.’ Both he and first violinist Alexander Pavlovsky agree that the answer lies in prioritising the forward momentum of individual voices rather than thinking of the music in rigid ‘vertical’ blocks. ‘Getting the parts to line up is a challenge,’ Kam concedes, ‘but in reality the music is very linear. Thinking about it like this also helps make sense of Bartók’s tempo markings. As with everything else, they’re so clear that it’s very easy just to follow them exactly, but I think they’re really there to show the relationship between the different speeds and the way that they evolve. It’s always about the forward motion of the idea.’

An early encounter with composer György Kurtág, one of Bartók’s most ardent champions, appears to have given the group’s approach an important seal of approval. ‘We met him many years ago when we were performing in Vienna, and we played him a little of the Sixth Quartet,’ says Pavlovsky. ‘He went over to the piano and played through the whole thing from memory. What was amazing was that it sounded as if his hands were barely touching the keys, just floating over the music. Even the most brutal moments seemed to stop in mid-air.’ The players also found answers to questions of style and taste in Bartók’s own recordings of his piano works. ‘He was a very gentle, introverted person, and you can hear that in his playing,’ Kam says. ‘There’s a tendency for performers to over-exaggerate each little change in tempo or dynamic, but that isn’t what he does. The scale of everything is always so gentle and musical. It’s very softly spoken, which isn’t what we’ve come to expect of Bartók’s music in the past 50 years.’