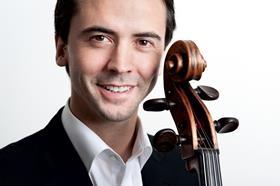 The Prélude of this suite is in the form of a French overture, a Baroque form consisting of two contrasting sections – Grave and Allegro. You have to think of a vain French king – someone who likes to make big gestures with his arms. The Grave is usually played too slowly, but it should have a lot of energy. The beat is two, not four, so feel the minims as the pulse when thinking of your phrasing, with a metronome mark of around 32.

The golden rule for double-stops in Bach is that they involve a slight arpeggio, releasing the lower notes before the upper ones. Think of them as a group of separate voices. Imagine you are in a good chamber music group: the bass voice doesn’t hold the notes the same way as the soprano – it has to release earlier. This is the case with the very first octave (example 1).

Every chord should have a pulse, which gives the music groove. If you emphasise all the notes equally you spread your pulse and the listener doesn’t know where they are. The pulse is the moment you reach the upper note and this is where the sound should reach its full intensity. The bass note is much lighter – it’s a preparation for going into the sound as you go up in the chord.

Practise this by playing the upper voice alone a few times with the type of sound you want to have. For example, the chord of the second bar should be focused and close to the bridge. So first play just the A flat and slowly bring in a rounded bowing gesture and catch the F on the way to the A flat. Make this gesture even rounder and catch the B natural on the G string. As your bowing gets rounder and deeper your main concern is still the moment you hit the top note.

There are often ‘virtual’ bass notes in the harmony that are not played and these notes have a dramatic impact in your interpretations so it’s important to understand what they are. For example in the down-beat of bar 18 (example 2) one expects E flat major. Instead the virtual harmony is C minor, the low C put down on the second crotchet  already virtually present on the down-beat. For that reason, play the E flat with special intensity. This is something I learnt from Anner Bylsma, and it totally transformed the way I look at Bach. 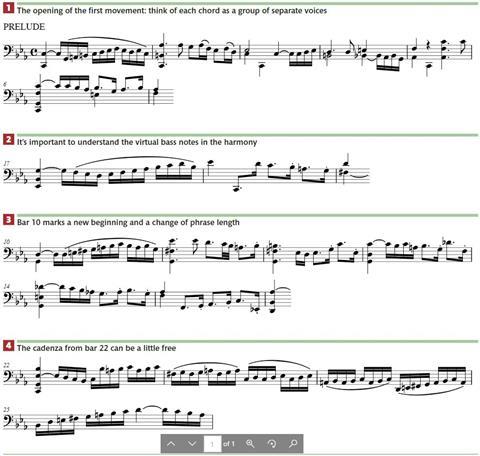 Because you’re playing by yourself, not accompanied by a well-tempered instrument, you should use pure intonation in order to make the harmonies and the instrument ring. This means playing intervals in their original, natural way: that is not tempered (twelve equal semitones); and not too melodic or leading (narrow semitones). So in major triads play the 3rd low and in minor ones play the 3rd bigger than you might think. Try it until you find a moment where the two notes blend and there is a ray of light.

Harmony takes precedence over melody in this music. Don’t think, ‘I want a smaller semitone here.’ Think of the harmony. For example, if you play it as originally written in scordatura, on the down-beat of bar 2 the two top notes form a minor 3rd. Don’t play the A flat too low. There will be quite a wide semitone between the A fl at and the G but this is all right. Don’t play the E flat of the minor 3rd on the down-beat of bar 3 too low, but do play the B natural down beat of the fourth bar quite flat.

Always think of harmony first and of how the note integrates into the chord you’re playing, trusting that the melodic line will work. The small expressive semitones we cultivated in the late 19th century are not right for this music.

Think of the way your phrases are built and try to make them understandable for a listener who doesn’t have the score in front of them. That means keeping the pulse, and making sure you know where the phrase is going. I like to give myself a plan – how many bars is this phrase going to be? It helps me construct my phrasing and know where I’m going. For example in the opening we have two-bar elements. Don’t play the first octave too loudly – go to the rich, dissonant chord of the second bar with great drama and then come down to where you started for the down-beat of the third bar. Then, starting in the middle of bar 3 you have an element going to bar 5 and then from the middle of bar 5 it goes to bar 7.

Bar 10 (example 3) marks a new section, and like the beginning, I go to the next bar, bar 11, which is a very dramatic, dissonant chord. But this time it’s not a two-bar phrase: there’s a new modulation which suggests we go on. This is an example of how a great composer builds a piece of music. Now we go for a longer journey and then in bar 15 there is a little one-bar bass solo: here your ‘bass player’ has to have more transparent sound and be more articulated, otherwise it will be too thick. From bar 17 it’s five bars plus one. From bar 22 (example 4) there is a cadenza, which can be a little bit free, and from halfway through bar 25 you are rhythmical again.

You need only a little vibrato in Bach: 85 per cent of the phrasing and colour should come from the bow. This provides a wonderful opportunity to work on your palette using only your right hand. This music comes from a time when vibrato was used as an ornament, like a trill. That’s the basic rule, but you can take liberties playing a modern instrument in a big hall. A little vibrato helps the frequencies live longer and go into the space, but it should not be in the foreground.

Anna Magdalena’s score gives us an idea of where legatos are wished for, but it’s not clear and most of the time you can’t tell if the slur lasts two, three or four notes. You have to decide for yourself which bowing is going to make the music speak, clarify it. With this in mind, a slur is not just putting notes in the same bow, it gives shape. Think of playing the slur the way it looks, and use the bow to give it that shape. If Magdalena hadn’t written the long slur in the first bar of this suite I would have found a more democratic way to play these semiquavers. But her marking suggests that the sound should fall into the dramatic second bar, like a waterfall.

Read: The final five bars of the Prelude from Bach’s Cello Suite in D minor