Playing along with Bach: composing descants for Bach’s cello preludes

Brian Forst writes about former White House violinist Peter Wilson’s journey to compose descant parts to Bach’s cello preludes - not only as a pandemic project, but as a gift for a special someone 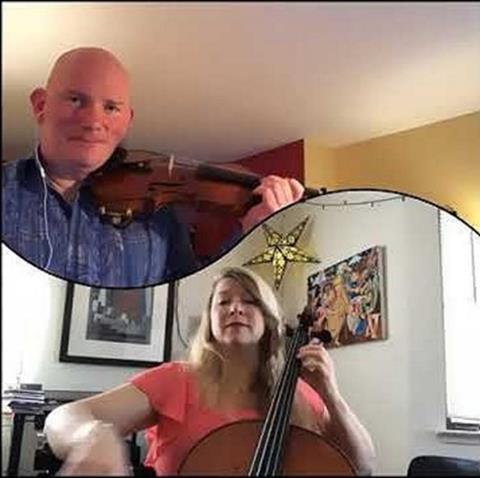 A screenshot from Peter Wilson and Jennifer Kloetzel’s video performance

The pandemic opened opportunities for professional musicians to move in new directions, to engage in creative projects for which they previously had little time. For Peter Wilson – a talented violinist, pianist, conductor, and composer – it provided the time and energy to compose an exquisite descant for violin over the prelude to Bach’s G Major cello suite. It soars above the iconic prelude in much the same way that Charles Gounod’s descant, Ave Maria, sings a sweet melody over another of Bach’s preludes – the C Major prelude that opens Bach’s Well-Tempered Clavier.

The G Major Prelude for cello needs no accompaniment. Like Bach’s C Major prelude for keyboard, it is a masterpiece as originally conceived for soloist. Still, one of the many astounding aspects of Bach’s music is how it draws in composers to play along with his themes, or to rework his compositions for other instruments. Johann Sebastian himself was, of course, first to do so, recasting themes from one form to another: his early cantatas show up again and again in his Christmas Oratorio; his C minor cello suite was rewritten in G minor for lute; he re-wrote violin concertos for harpsichord; and so on. Later in the same century, Mozart recast fugues from Bach’s Well-Tempered Clavier into string quartets. In the next century, Brahms and Busoni reworked Bach’s immortal violin chaconne, from his second violin partita, for keyboard. In 1940, Leopold Stokowski recast Bach’s Toccata and Fugue in D minor for orchestra, for the Disney movie, Fantasia. In 1973, the Modern Jazz Quartet reworked several Bach pieces into music for their unique quartet form: piano, bass, vibraharp, and drums. Then in 1985, Dmitry Sitkovetsky commemorated Bach’s 300 birth anniversary by transcribing the Goldberg keyboard Variations for string orchestra or string trio.

Gounod’s 1853 ’Méditation sur le Premier Prélude de Piano de S. Bach’ – his Ave Maria – is one of the most widely played improvisations inspired by Bach. Gounod’s out-of-time collaboration with Bach was different from those that preceded it in one important respect: He took a work consisting of arpeggiated chords with no distinct melody, and over it wrote a sweet song, converting Bach’s original work into a beautiful accompaniment to Gounod’s descant.

Gounod’s overlay was an inspiration for Wilson to apply essentially the same idea to another famous Bach piece consisting largely of progressions of arpeggiated chords – the G Major Prelude for cello. Just five months before the end of his 30-year career as White House violinist and leader of the string section of the U.S. Marine Band, the pandemic struck and the musicians were sent home. Wilson used some of his newfound leisure time to compose his song over the Bach cello prelude.

Wilson had previously recorded both parts of Gounod’s Ave Maria. But Gounod’s descant and the pandemic weren’t Wilson’s only inspirations. He was drawn to this enterprise also because he loved Bach’s first cello prelude, which he used as a lullaby when he needed sleep in his college days, and because the love of his life, Jennifer Kloetzel, a Juilliard-educated professor of cello at the University of California at Santa Barbara (and founding cellist of the Cypress String Quartet), adored the piece too and played it frequently.

So he asked Jennifer, his then fiancée and now wife, to record the piece so that he could create a descant above the cello line. He listened to her part over and over, humming prospective violin voice alternatives over the top, bar by bar, tinkering with melody options, bowings, double stops, trills, and dynamics, until he found a satisfying solution to the puzzle. He then worked out tempo and phrasing details with Jennifer to make the two parts cohere tightly. The project was especially challenging as the two did all this virtually, Peter in Virginia and Jennifer in California. Neither pandemic nor bicoastal separation kept these committed musicians from completing their appointed rounds.

Because Bach’s G Major cello prelude has elements that differ significantly from those of his C Major piano prelude – including a fermata in the middle and a brilliant ascending conclusion – he ended up with a descant that passed the lead voice from violin to cello toward the end, using the violin part to provide harmonic support to the triumphant conclusion. Gounod begins his Ave Maria by repeating the first four measures of the piano prelude before the string descant enters, and Wilson elected to do the same for his new duet. He named the piece ’Serenata’.

So, where does Wilson go from here? Jennifer strongly encouraged him to write descants for Bach’s five other cello preludes. Is he resisting the idea? Quite the contrary: ’As pandemic projects go, trying to create more descants to pair with the Bach cello preludes is far more appealing than cleaning my house,’ he says.

The project has been a labour of love. In more ways than one. Peter has now composed descants for the first four of Bach’s cello preludes. He is making the collection a wedding gift to Jennifer. They are making beautiful music together, on a path to continue to do so for years to come.

Read: Four insights on the Prelude from Bach’s Cello Suite no.1 in G major