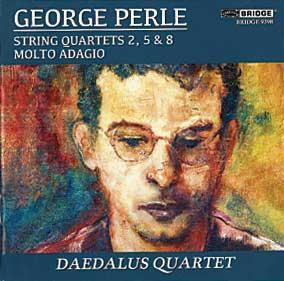 The music of highly regarded American composer George Perle (1915–2009, perhaps best remembered for his writings on Alban Berg) is not heard frequently on the world stage, a fact that makes this excellently played disc all the more valuable. He wrote nine quartets but suppressed all but four – the Second, composed in 1942, he later dismissed as ‘a tonal piece I wrote to prove I could do it’.

It is through this work that the American-based Daedalus Quartet’s disc provides an easy entry point for newcomers to his later style of composition – the quartet’s slow, rocking finale, though often revealing the influence of Bartók, has its roots in the late 19th century. Although not technically demanding, it gives a taste of the exemplary intonation and balance of the Daedalus’s ensemble. Having described his Fifth Quartet as ‘one of the most successful of my early twelve-tone tonal works’, Perle would, one hopes, have approved of this warm and smooth account with its will-o’-the-wisp approach to the scherzo.

The Eighth Quartet from 1988, with the title ‘Windows of Order’, is very different, being in one extended movement and exploring its own world of atonality. The Daedalus players perfectly clarify its complex rhythmic structure before completing the disc in the world of Schoenberg with Perle’s early Molto adagio. Sound quality is excellent.